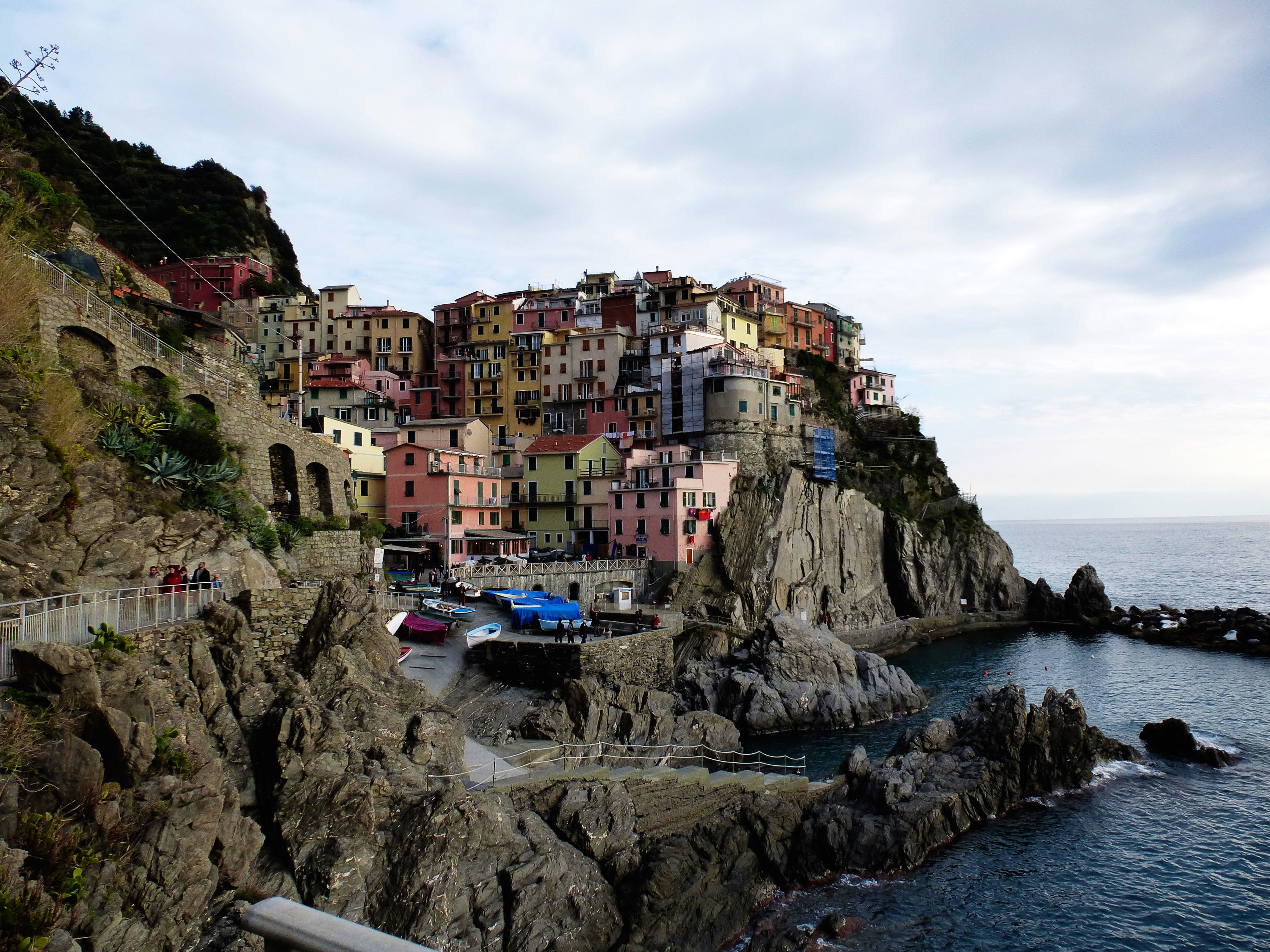 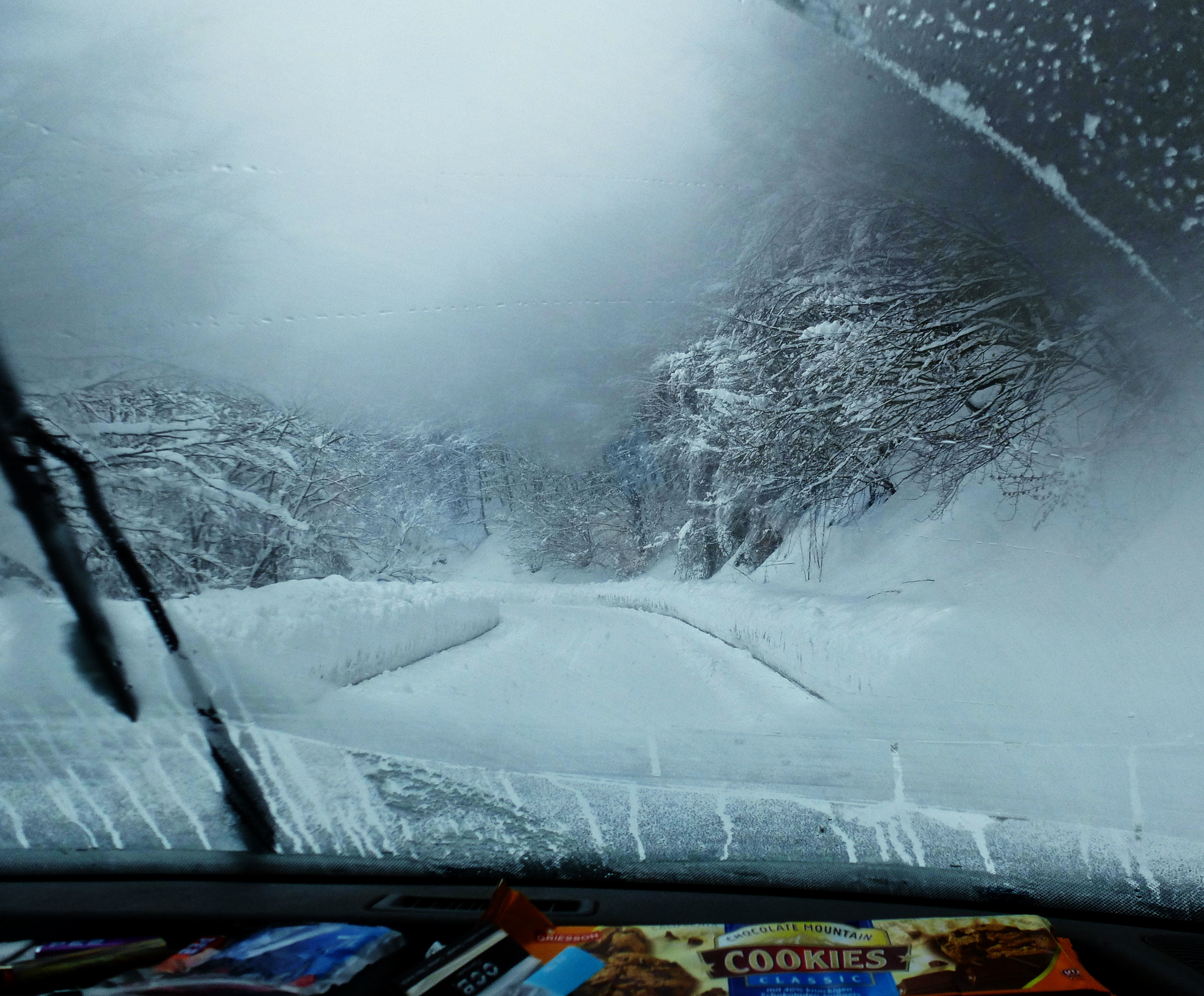 It was an amazing week discovering the Cinque Terre, in the Liguria region. We were blessed by the weather everyday until our departure. But let’s start from the beginning. Last Monday we got everything ready to drive there from Milano. We decided to not use the hiway and instead took side streets that brought us first near Piacenza, and from there we entered into a beautiful valley. 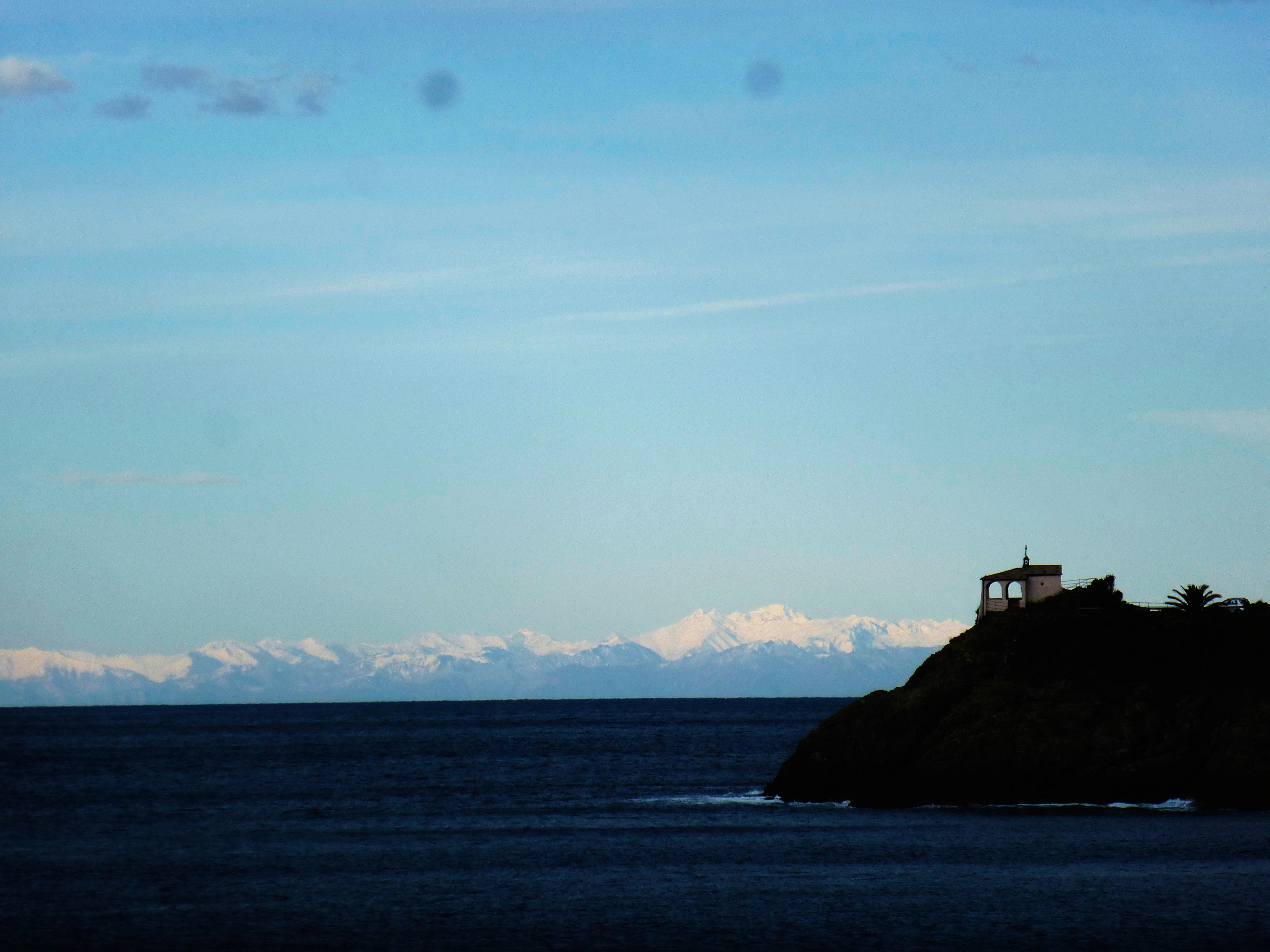 It was our first time ever. Many thanks to Francesco, our mechanic from Milan (he takes care of Mork when needed), who’d given me the chains just last year. And they’re really good ones, considering that in only 5 minutes we got the job done: easy peasy.

So, it was our first time with this kind of snow and we did pretty well I can say. We arrived safely at Bonassola, a small town just at the gate of the Cinque Terre. The morning after was such a release when we saw a nice blue sky when the sun came up. What a relief-!

We entered the tiny and little roads (switchbacks, really) of Cinque Terre that pass through just at the top of the hills around them. Our first stop was the first town of this national park: Monterosso al Mare, famous in the past for its traditional salt anchovies. We easily found parking just on the seaside, since it’s still not ‘in season.’ Not so many tourists and not so many cars.
But if you decide to visit these places in the summer, the best option for sure is by the train that stops in each one. Tickets are €10 euros a day.
We visited the town, the tiny little streets that lead to the shore, surrounded by mature lemon, orange and olive trees. We took a walk to the top of the hill to visit the cemetery and to see the beautiful view from there, where we could see all of the 4 remaining towns in the distance. 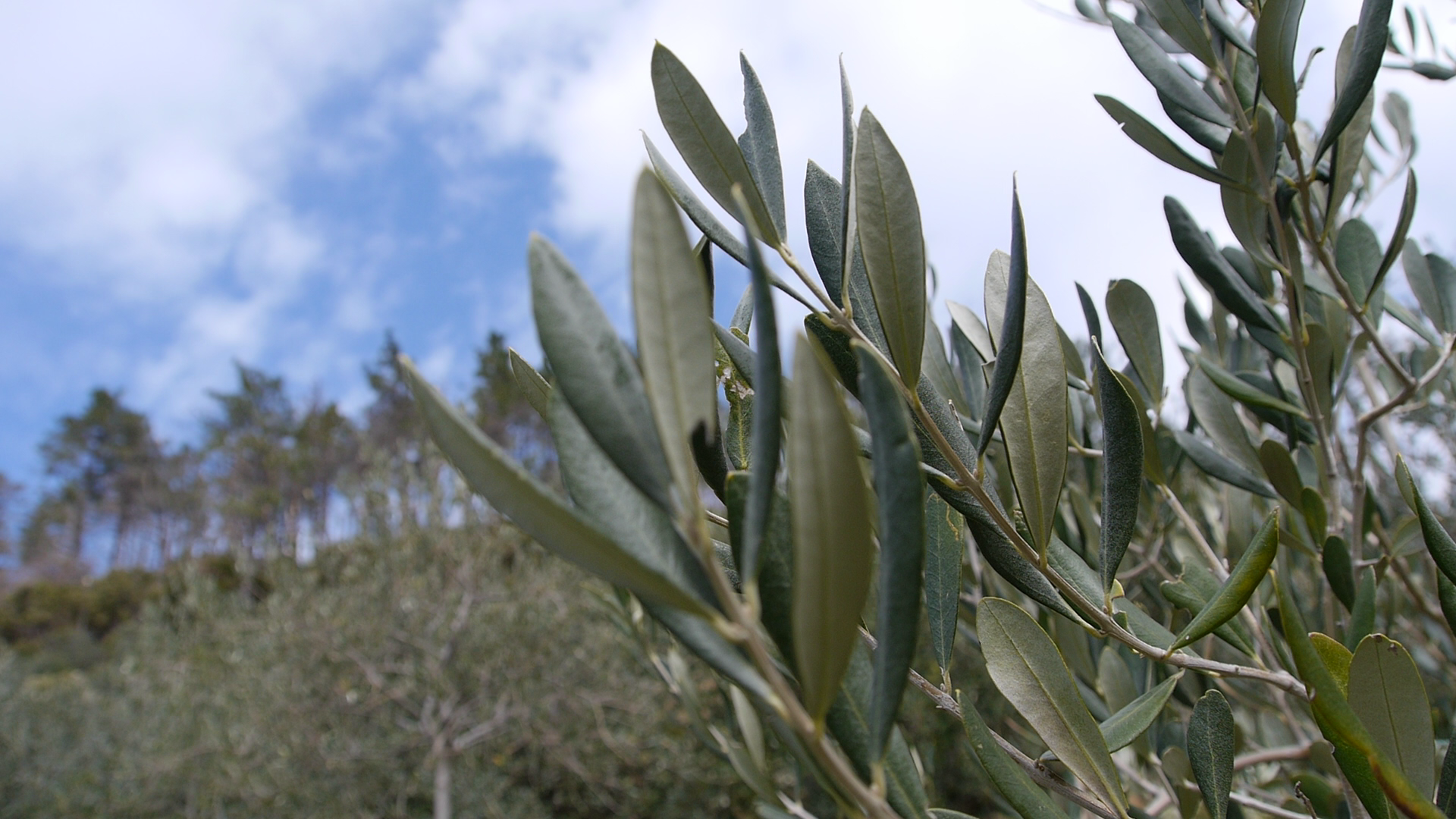 We organized before we left a few meetings and interviews with locals for a new video project about this area, and on the second day we drove to the other end of Cinque Terre: Riomaggiore. It’s another really tiny town nestled into a tiny space in between two mountains right on the seaside. In our project, we wanted to discover the other side of this area. Not the touristic one near the sea, but the traditional one of the hills.
The history was rich, including the story behind the dry walls, more than 9.000 Km built by expert workers to provide useful space for cultivation and also protection from avalanches and landslides. The terraced mountainsides are practical and picturesque.

My first interview was with Pietro, a young man from Bergamo, that 15 years ago fell in love with this landscape and bought a piece of land on the hill. He is now the only DOP oil of Busanco produced in that area (the DOP means: ‘denomination origin protected’). When you think about farming, you know it’s a tough job. There it’s even tougher.

Imagine what it means to carry up and down all the stones for the walls, the soils and all the equipment you need to grow superb olives for quality oil. And of course, the ones that are ready need to be brought down the steep incline to be pressed for the best oil.

His mission is not to become rich and speculate, but to simply to take care of the land and to provide a small quantity of extra virgin oil. You can see his work, his passion and his dedication reflected in each drop of his golden nectar. 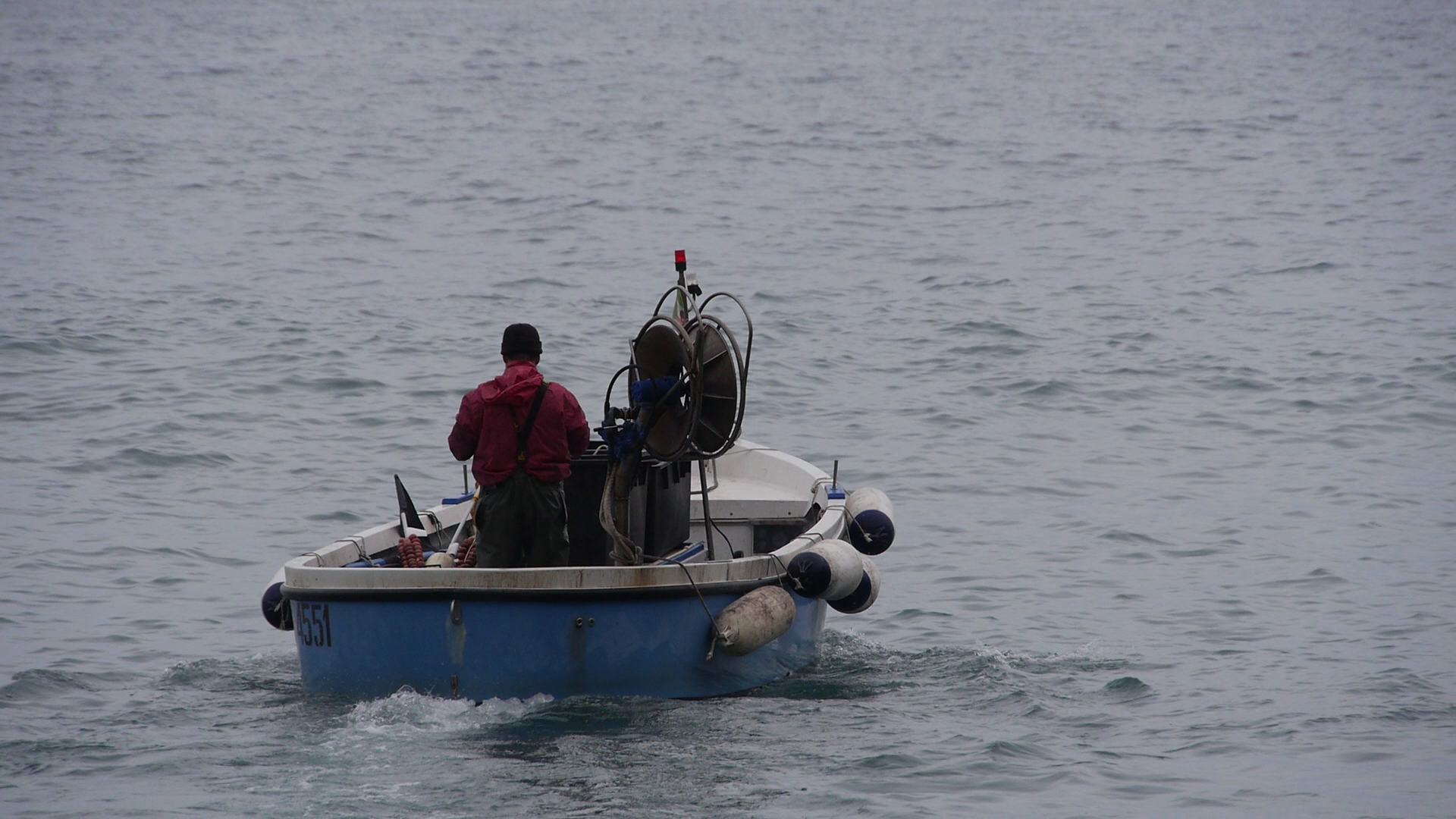 In the afternoon, we drove to Corniglia, the next town over, for a visit. We took a nice walk during sunset around the main harbor and to the beginning of the ‘way of love,’ a walking path that connects all the towns, which was unfortunately closed. From one side of the town you can see the crazy way houses were built back in the day, almost one on top of the other, with so many different colors and shapes. Most definitely a unique view of this place.
We easily found parking on the main road up to hill where we spent the night, witnessing an amazing sunset and the sun disappearing in to the sea.

The next morning we opted to go back on the road to visit the second and the third towns: Vernazza and Corniglia. Two sweet small towns on high cliffs, dominating and overlooking the seaside.
The difficult and contorted grid of the streets were bordered by the houses and buildings. Stairs of different measures brought us up and down in each little corner of these places. We went back to the same parking as the night before, ready for Saturday- I’d fixed 3 interviews with locals and I knew I’d have to go up and down the hills like a ball.

I started at 9 AM with an interview with Edoardo, a local fisherman from Riomaggiore. He was another person that continues his traditional job with his passion for the sea and the fishing. He’s spent many years leaving from the shore in his boat, no matter the weather, looking for the delicious fish from this region. Especially anchovies, which are a deeply ingrained part of the local and traditional cuisine. 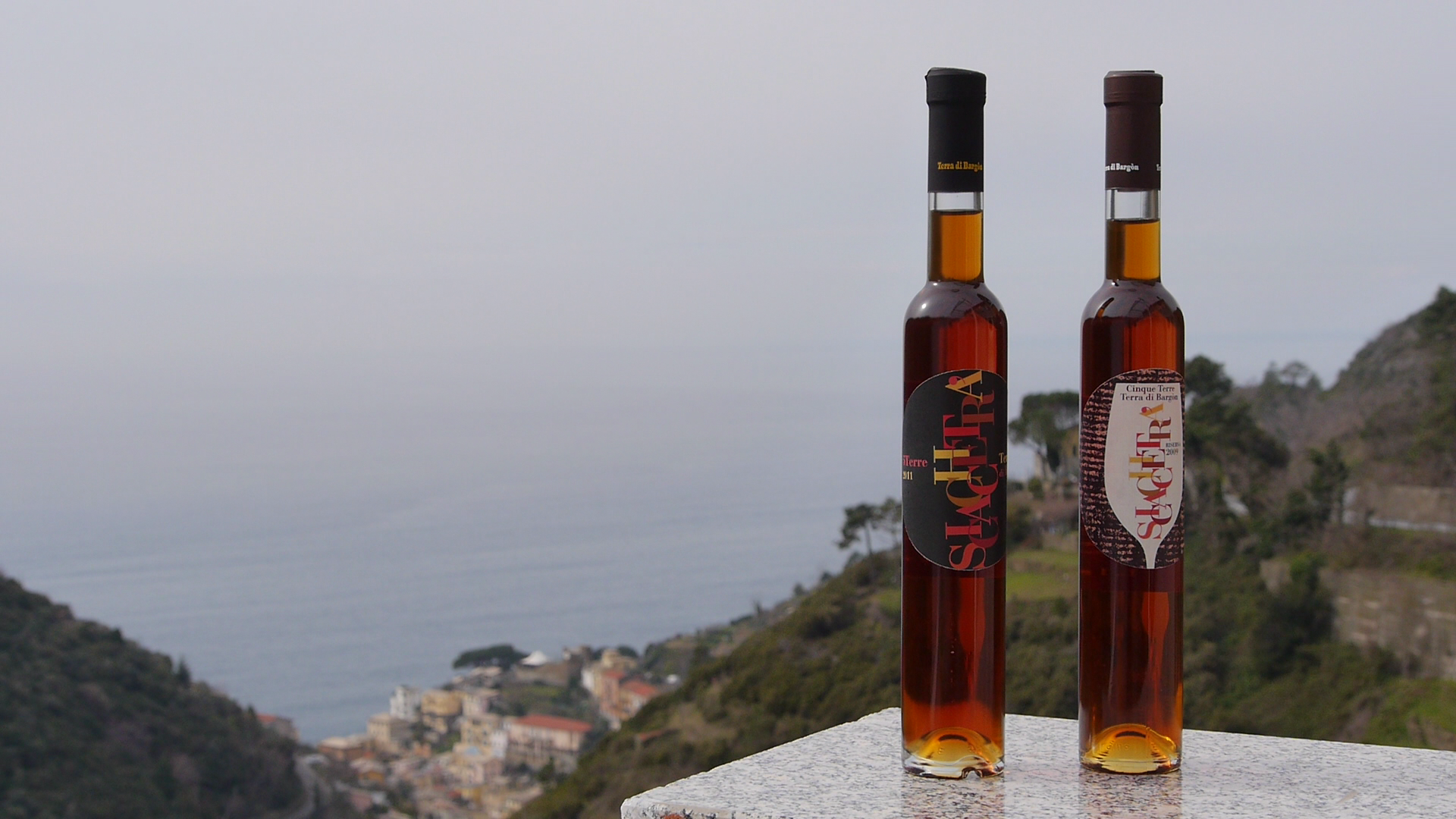 I went from the sea to the hills, meeting Roberto and his lovely wife Alessandra. Two dreamers and producers of another unique thing down here: the Scacchetra’ wine of Terre di Bargon. A passito sweet wine, made by using the best grapes and natural resources like the sun and the wind and then left to rest on special metal grid.

It’s an intense taste and an explosion of different flavors when you try a sip of this wine, it’s perfect as an aperitif with a nice goat or gorgonzola cheese. Again, I was so happy to meet people with such lot of love and respect for this land, for the products that they create, and just being there and giving their time to grow something as special as their wine.
The wine of course is good when it’s combined with a good meal. 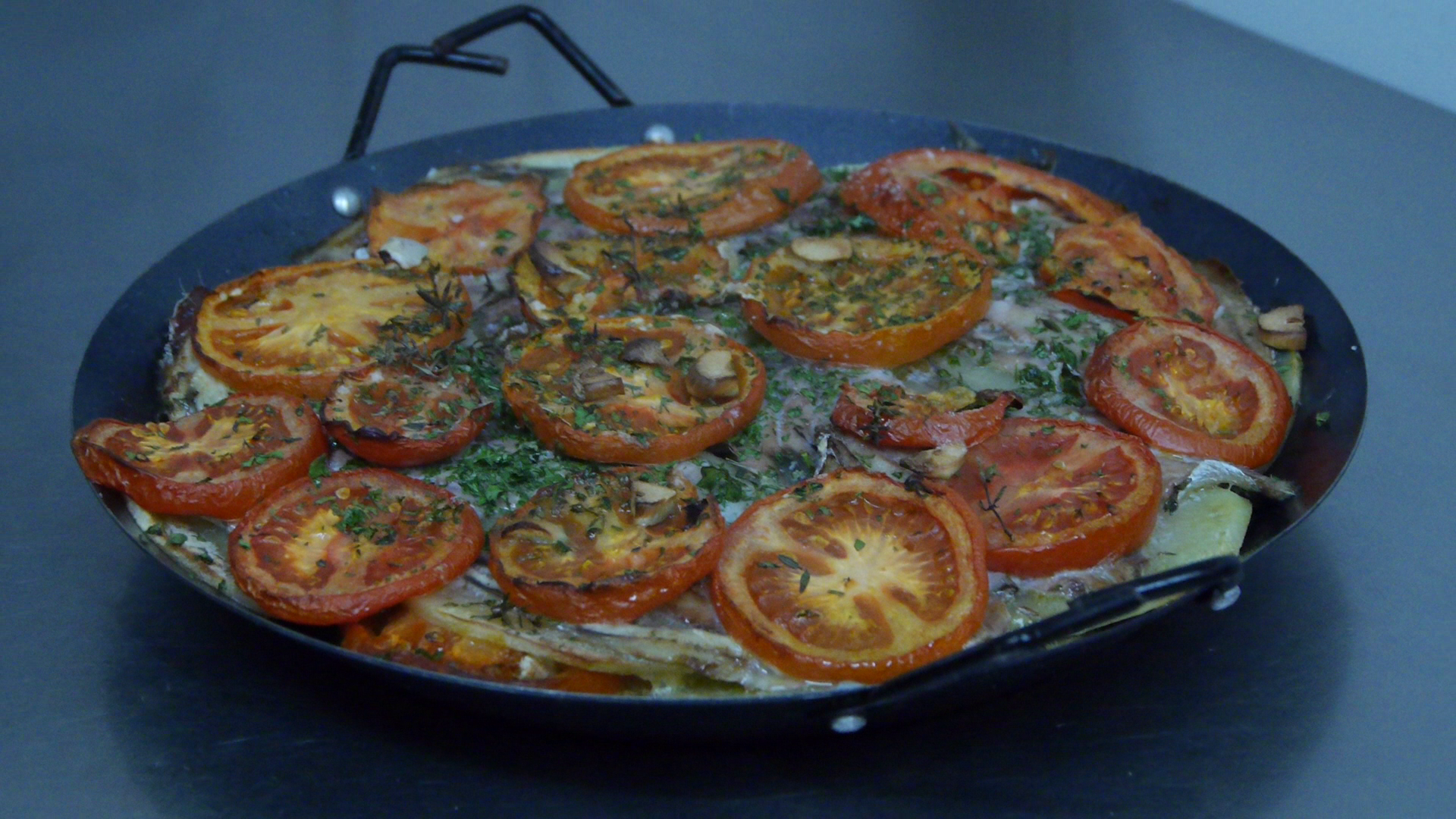 This is the reason I met Lella Rosa, the owner of a nice restaurant in town, just near the train station: La Via dell’Amore. She open her kitchen for me and showed me one traditional recipe of the region: an anchovy cake (as we Italians call it).

It’s simple and easy, from the farmers and poor people’s traditions, made just with potatoes, anchovies, tomatoes and spices. It’s cooked in the oven for 25 minutes. Spectacular! The essence of this area: the sea and the land together in one dish. Again, I felt lucky to meet a person that keeps up with tradition, has a love for homemade food from her grandma’s recipes and a pride for what she offers in her restaurant. 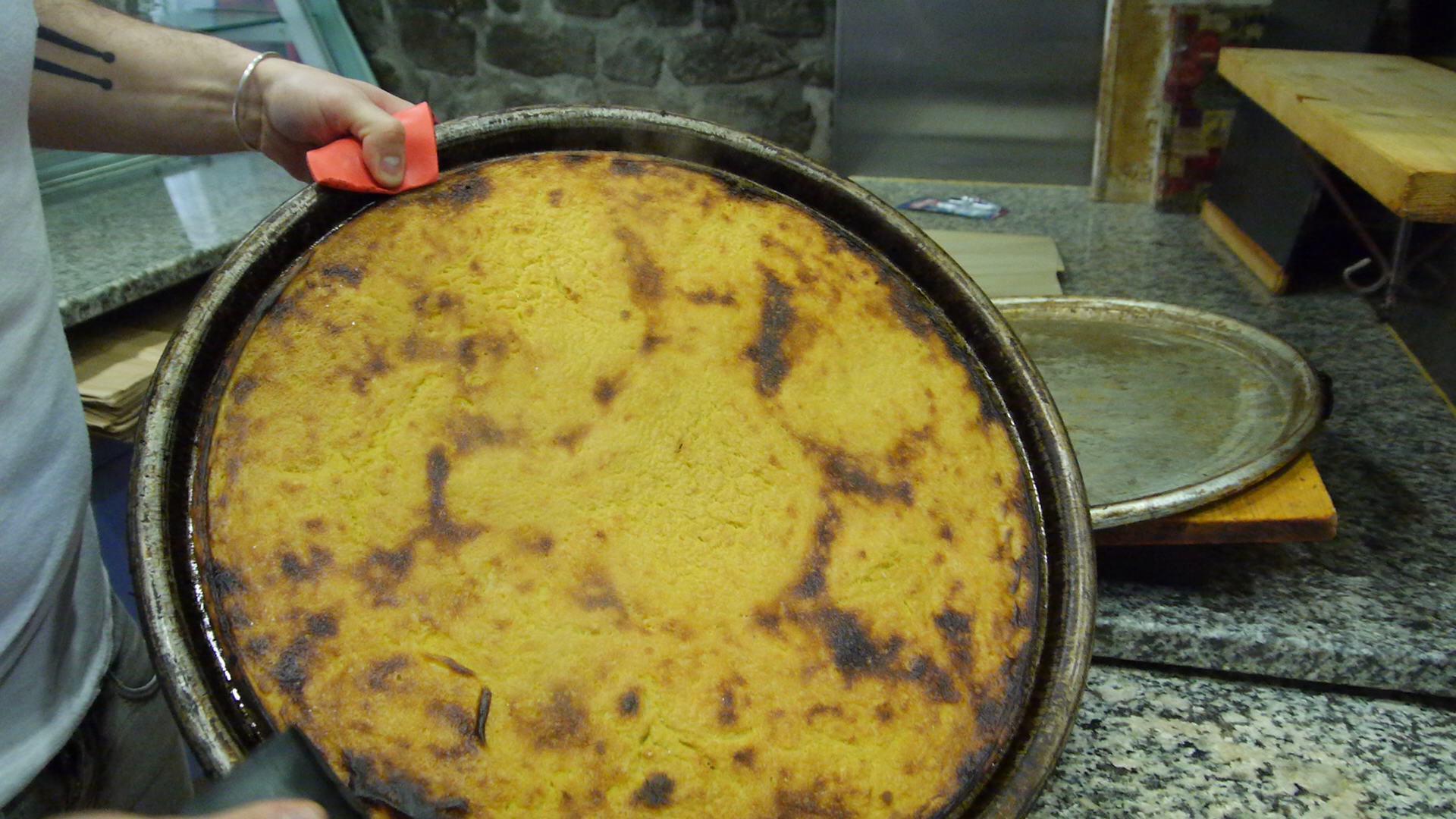 Sunday arrived and I had my last meeting in Manarola with Mattia. A young fella from my hometown Milan, but he was actually ‘adopted’ from when he was a child by the town. He’s young, but he keeps traditions running in his place called La Cambusa. He offers different types of focaccia- and of course, the Farinata of chickpeas. It’s a simple but very traditional dish from the area, started back in 1284, during a naval fight between Genova and Pisa.

The story goes that during a storm, some bags of the flour fell into the salty water of the sea. 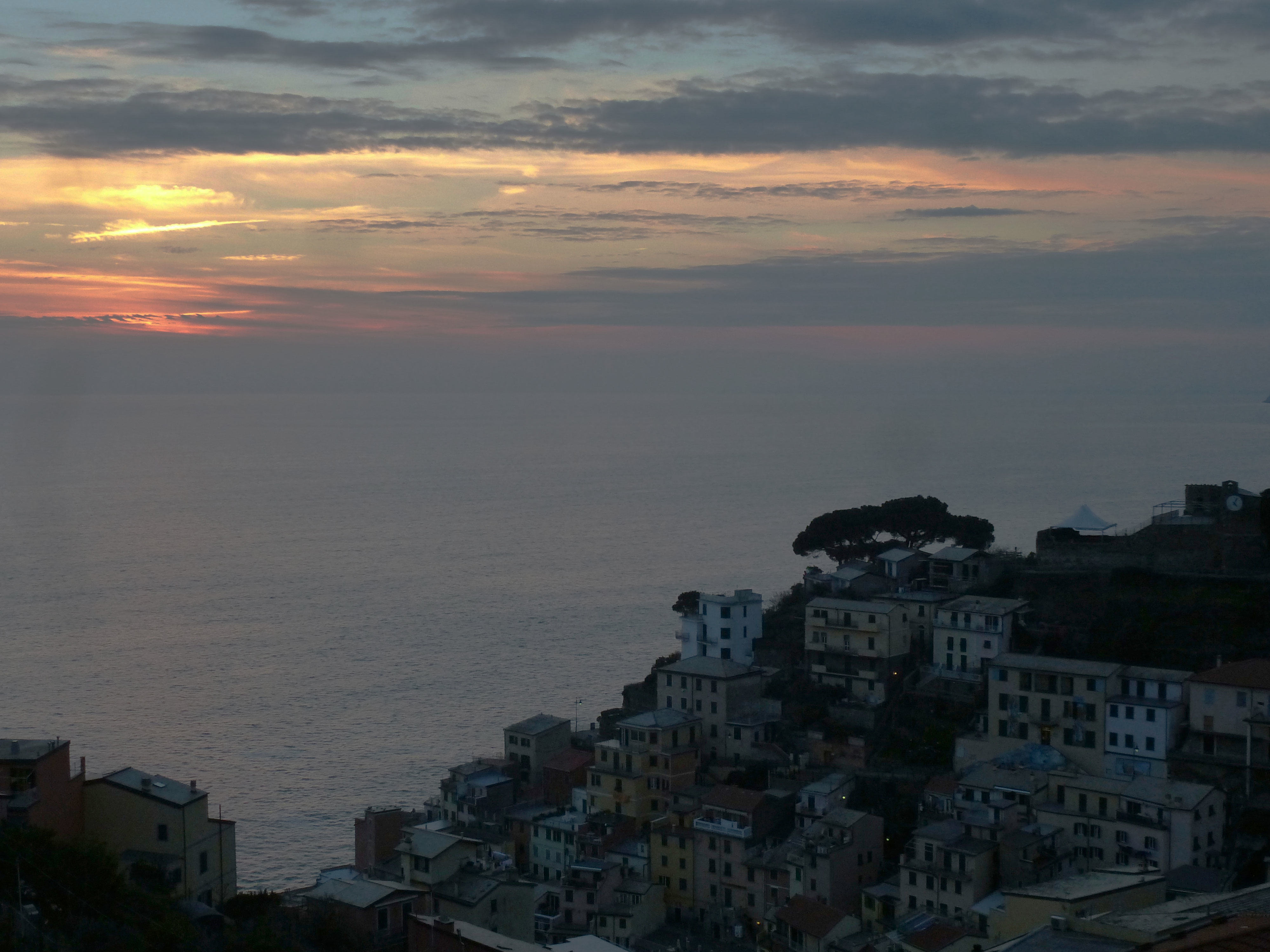 The ship’s crew tried to get back what they could. At that time, food wasn’t so easy to find and they started eating a sort of ‘mash’ dish. Some of them left the concoction in the sun. Later on they tried baking in ovens and they found out that wasn’t so bad. Well, this is just a legend. The reality was made in front of my eyes by Mattia, with simple gestures and great flavors when the Farinata was ready.

On the way back to Milan after discovering the Cinque Terre, the weather started to be a bit cloudy. It was perfect timing to leave this amazing part of italy, where I had the chance to learn from the locals. Their shared love that we all should have for our land, our traditions and to keep on doing what we most love to do, no matter what was very inspiring. Thanks to everyone! -Armando, Mel & Mork