Mama Etna’s In a Mood, We Found a Paradise

By Armando Costantino on April 13, 2013
At the moment, I’m wearing ‘essence of (pardon me, kids) pissed off Etna. We stayed in a seaside town last night, took an early morning stroll through- and I’m still covered in black Etna grit.

When she rumbles, she roars. It’s like listening to your favorite thunderstorm, minus the lightning.

She’s speaking from the gut, from the heart- literally letting it all out. We were lucky enough to see it- she doesn’t do it every day, or even every month. But when she’s in a mood, she spews grit.

The quiet Friday morning streets were only clean for the main transport avenues, and you could see people sweeping/shoveling her dark into bags. Most of their trash? Etna ash.

On the flip side, it’s spring in Sicily. So there’s the lovely scent of wisteria in bloom, swept from the corners by the seabreeze. 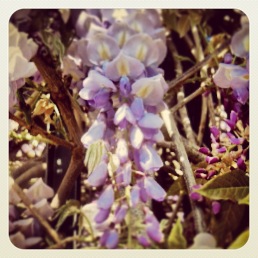 It was a good morning made better by several things: more diverse opportunities for us (my second article on Digital Nomads was published, about how we earn money. It’s one of my new fave sites and led me to another possible collaboration) and Armando landed two very cool gigs.

BUT: we had an off-kilter day yesterday, thanks to one gent. He That Won’t Be Named from these fingertips was… a narcissistic little ick. Grin. 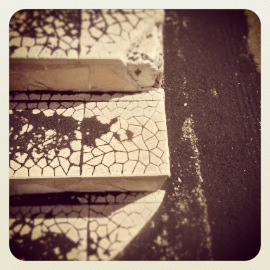 We left the farm animal delights to go to a spa, which was run by a nice and cuddly director who really wanted us to go there.

Enter: Pseudo-Fabio, the Spoilt. I have to admit, after being there just 5 minutes my uh-oh don’t like this much radar was going off, but I was willing to make a go of it. As long as Armando was happy.

He came back to Mork, storm-filled, and simply said: ‘I don’t like it here. Let’s go.’ I automatically sat upright and replied: ‘Yes, please.’ 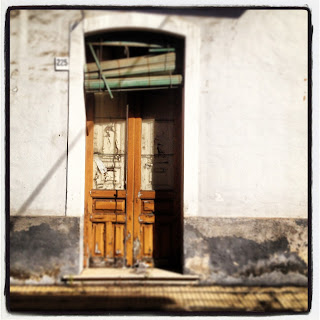 He went to the nice manager; apologized; and told him it wasn’t his fault his boss was a douche. The fella said he thought we might feel that way.

The skinny on the ‘meeting’ with the boss? 5 minutes of griping about how he needs to deal with lawyers; eyeballing Armando’s non-Armani shoes like it’s going out of style; asking ‘how much you want?’ without listening to the proposal- and my two all-time favorite ick moments to date:

‘Write me a script, send it to me and I will OK it. Then I will go to the hairdressers before the shoot.’

Ubuhduh, kerfluffle says what?? What did he think we did, paparazzi work for the overtly self-consumed, for fun? Was he prepping for a Hollywood role? Speechless-! Needless to say, we jetted asap. Furiously. 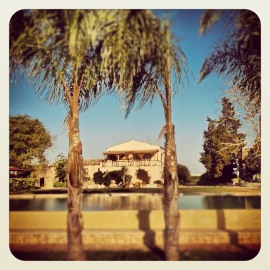 The seaside this morning, and then an offer from an organic farm/B & B that asked us to come with excitement, steered us back on track. Not putting our eggs in one basket, we’re learning to meet and greet. 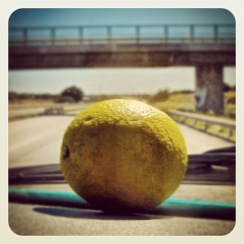 From the first moment: a sigh of relief. Our kind of place, our kind of people- Chiara and Lorenzo. A beautiful site that they rebuilt themselves (when you look at the photos, try- just try- to remember this is a so-called ‘agrofarm.’ I dare you.).

It’s a gorgeous place. Understatement. They’re happy to have us, and we’re already thinking about further connections. It’s brilliant. From faux ‘Fabi-less’ to honest-to-goodness goldens, it reminded me of one simple rule of digital nomading:

When life hands you a lemon, get the heck on the road for the next destination. From paradise in Sicily with affection, still coated in Etna.
Share on FacebookShare on TwitterShare on Linkedin