At the moment, we’re in Munich doing work. Armando’s job is taking us on a fast-track tour of European capitals, and we’re also doing the background for our own project. It’s the same one we’ve been working on for quite some time, but it’s finally coming to life. We’re excited

So our tour, for those of you who don’t know our work tour 2013: Munich/Austria/Prague (mini-stop in Brno to see our friends)/Berlin/Amsterdam/Brussels/London/Paris and back to Milan to have Adrian.

Armando had come up with the idea of carpooling to dampen our expenses. Our first carpooler, Lorenzo (of the bromance run-out-of-petrol fame- ha) was from Tuscany to Rome. We decided to do the same in leaving Milan. 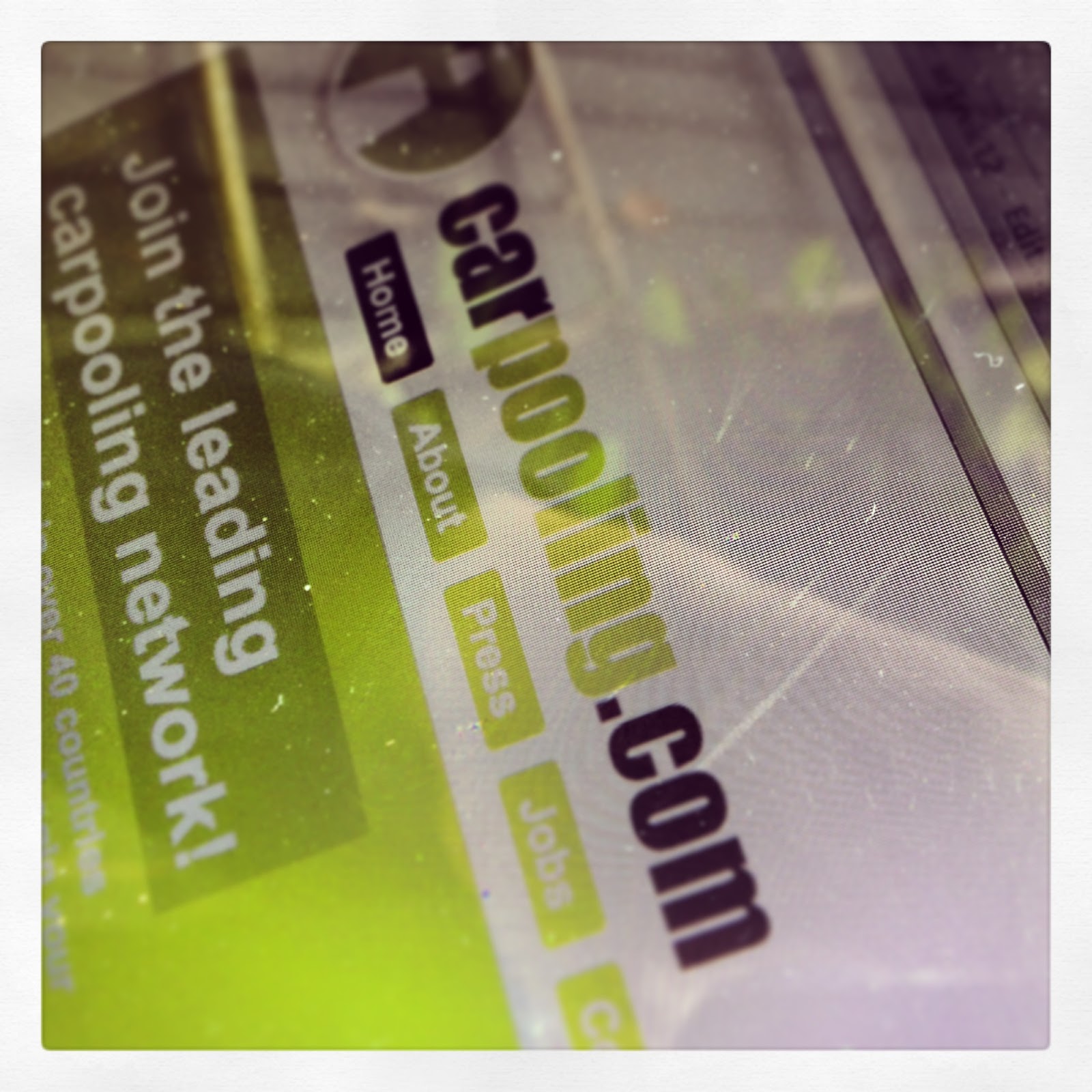 For our next carpoolers, Milan to Munich, we picked up two: Alex in Milan and Angela we picked up in Bergamo. The four of us spent 7 hours getting to know each other.

I’m not much of a talker. It’s kind of Armando’s forte. I usually have to be in a certain mood. But I found myself engaged in conversation with Angela, an American-born German/Sicilian with an 18-year-old-son. She’s also a graphic artist/designer/logo artist.

In front, Armando bonded with Alex- a young Italian fella that works in Munich and is very passionately working- and pursuing the Germanic language. We might meet him and his girl Saturday.

The thing about this carpooling: we meet fellow travelers, but completely different perspectives and ideas. It’s invigorating for the intellect. 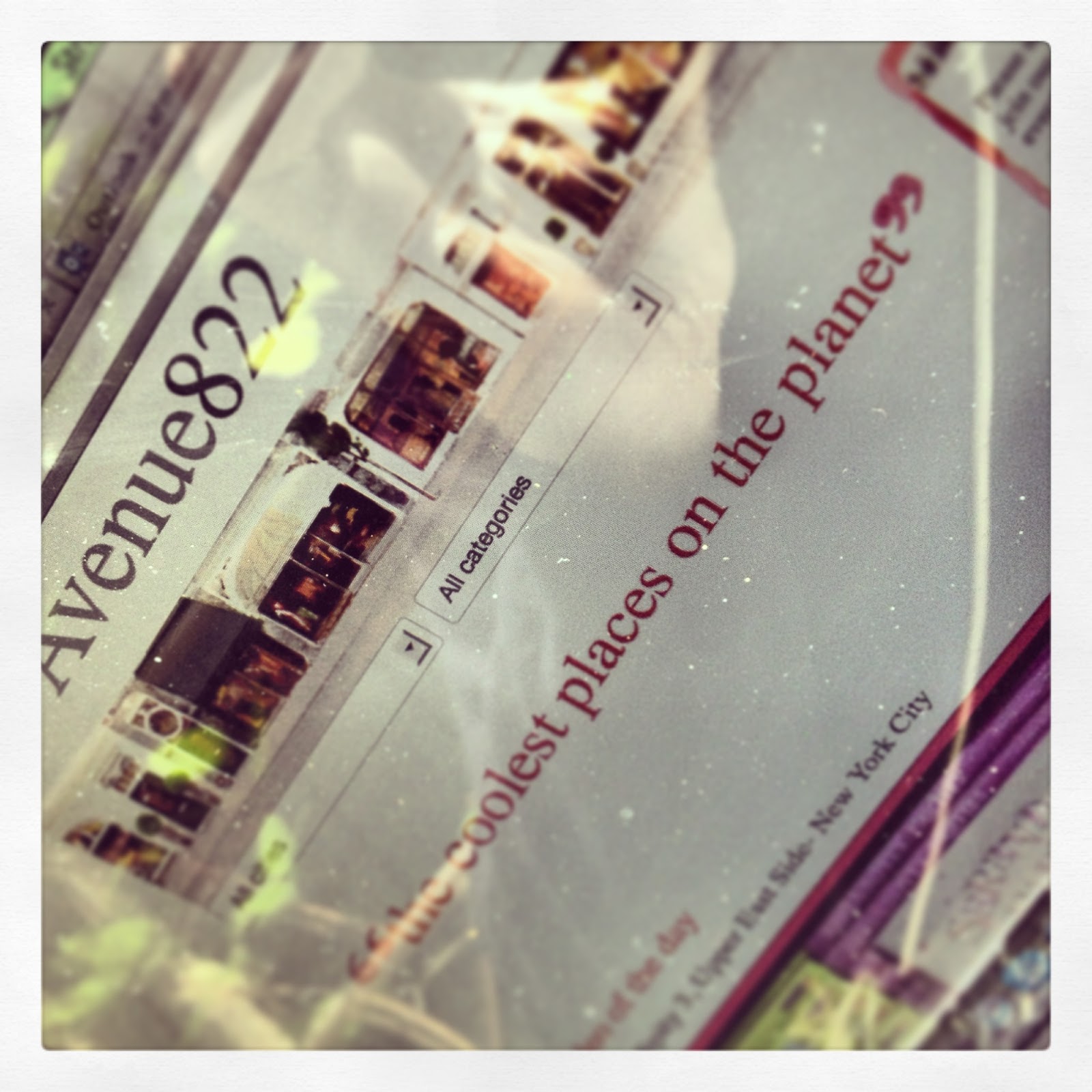 We’re also meeting people, in person, that we’ll be staying in touch with long after the trip’s over. Pretty cool, no?

The company Armando works for, Avenue 822, is brilliant. We had the opportunity to meet the geniuses behind the concept (i.e. his bosses) Marcia Sherrill and Diane Jenkins here in Munich. They’re inspirational, their enthusiasm is contagious and we absolutely loved finally putting faces and personalities to the names. 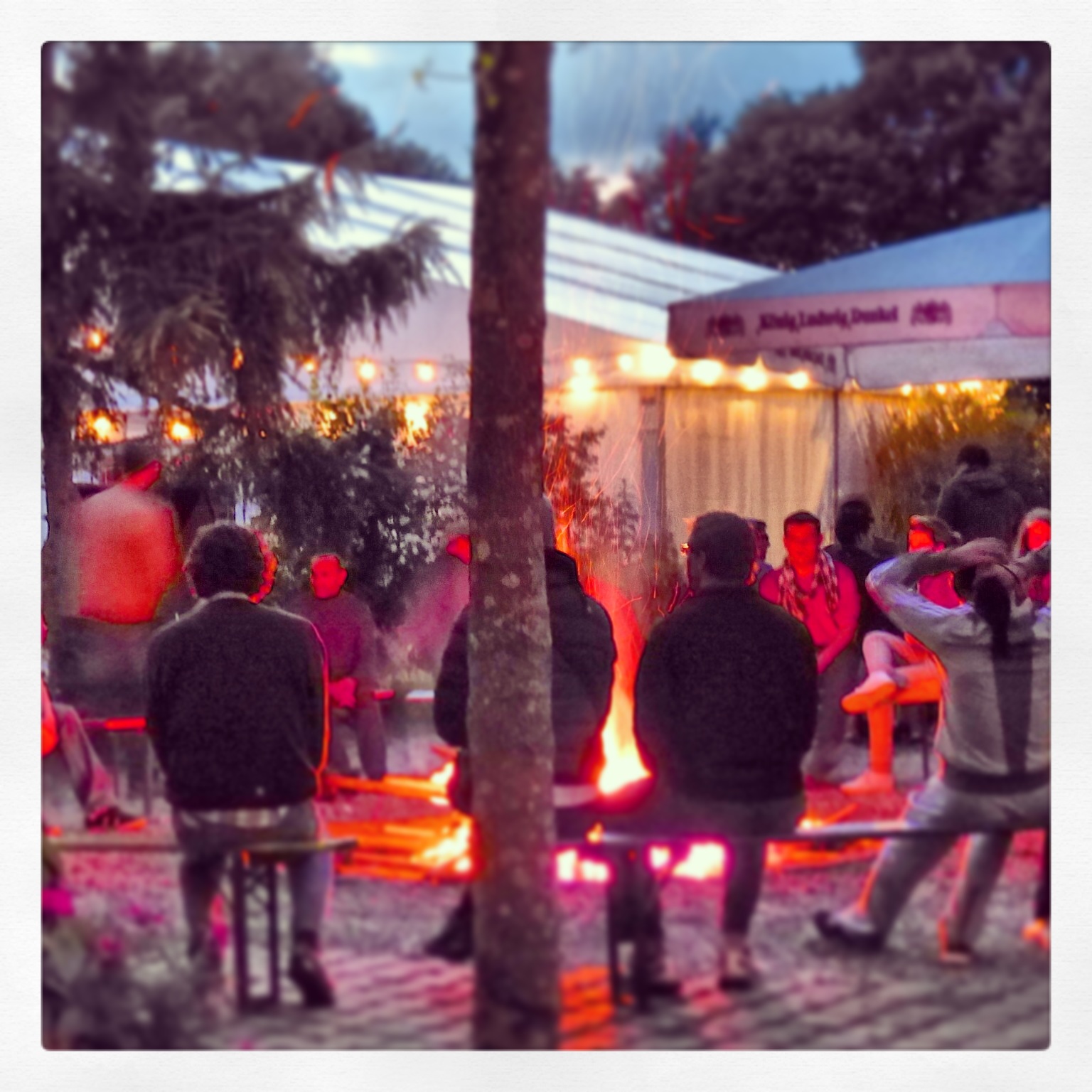 We met them our first* day in Munich. We’d arrived the evening before, a Monday, with Alex (our carpooler) getting clocked by a cyclist. Apparently one does not impede the bike lane, under any circumstances.

We went to the Tent to get the skinny on showers and Internet. It’s an extremely unusual ‘hostel,’ where they have shared floor space in a large tent or a meadow where you can camp in your own tent. It’s also surprisingly affordable for Munich (15 Euros for two of us, lively atmosphere, with the added bonus of an evening bonfire).

In the past few days, we’ve come to one conclusion: Germans are a little bit crazy. 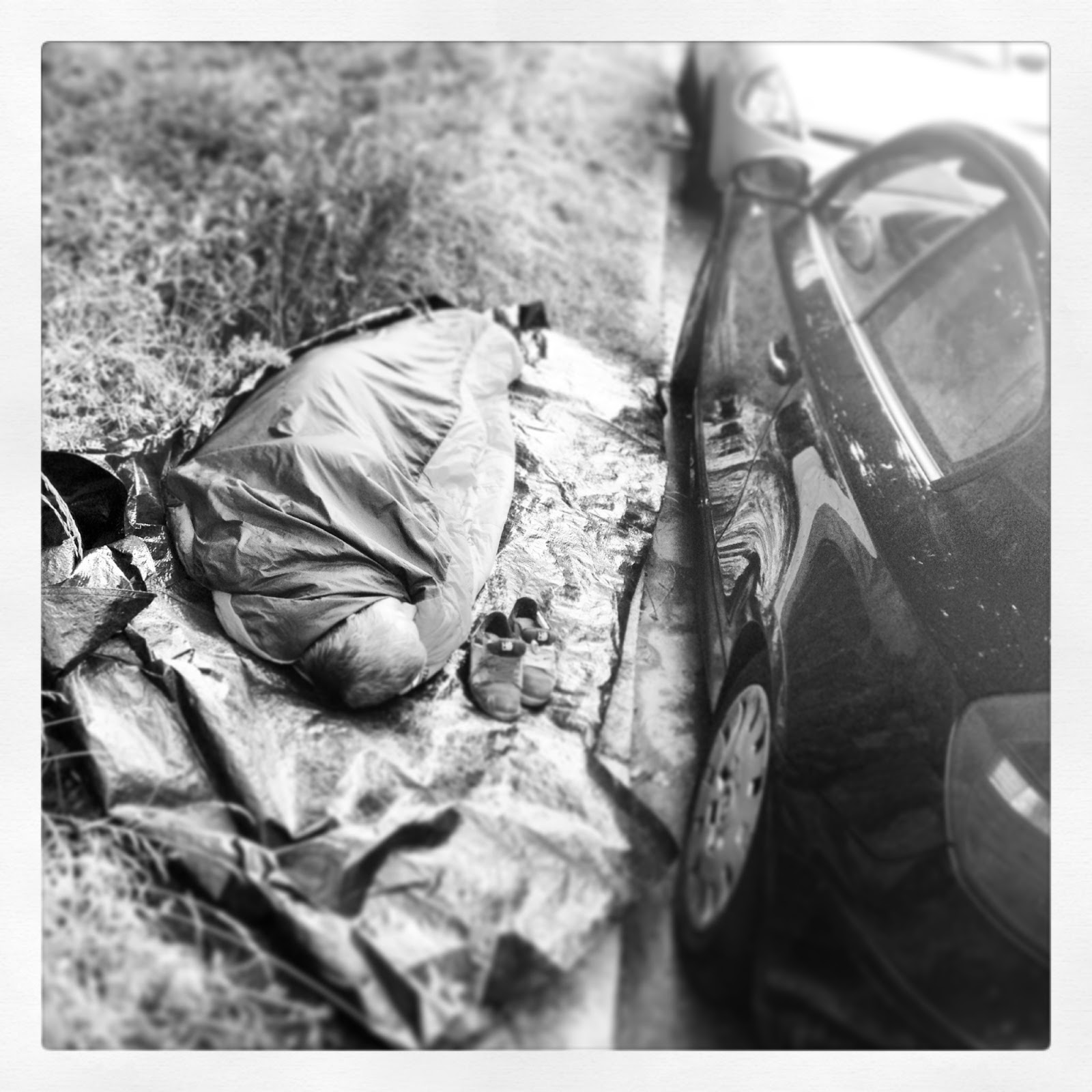 Sure, they are some of the best drivers we’ve seen in our travels. Of course there’s nothing even remotely resembling garbage lining any street. And compared to Italians, they are practical, sensible and quiet. But. They’re mental, too, just like all of us humans. A few samples:

The people famous for VW vans, camping and generally enjoying ‘alternative’ vacations have made sleeping in your car illegal. Any car. Illegal. It’s not highly enforced, but it’s there. How ironic is it that we’re driving a creation designed for sleeping in- that’s outlawed in the country that made it-?

(Side note: Montana, too, has odd laws. My favorite being: ‘No man can ride with a sheep in the cab of his truck without a chaperone.’ Seriously.)

It’s difficult to find a taxi that’s not a Mercedes. Really.

The famous Catholic Frauenkirche Cathedral Church in Munich was kept intact during WWII, not for its beauty but for being a landmark for pilots to strike.

Over 80% of this city was bombed- so when we went downtown to the main square (Marienplatz), it was a little disconcerting to see new churches and wacky architecture in an ‘old’ Euro city. I guess if you’ve got to rebuild, you may as well put some personality into it. Grin. 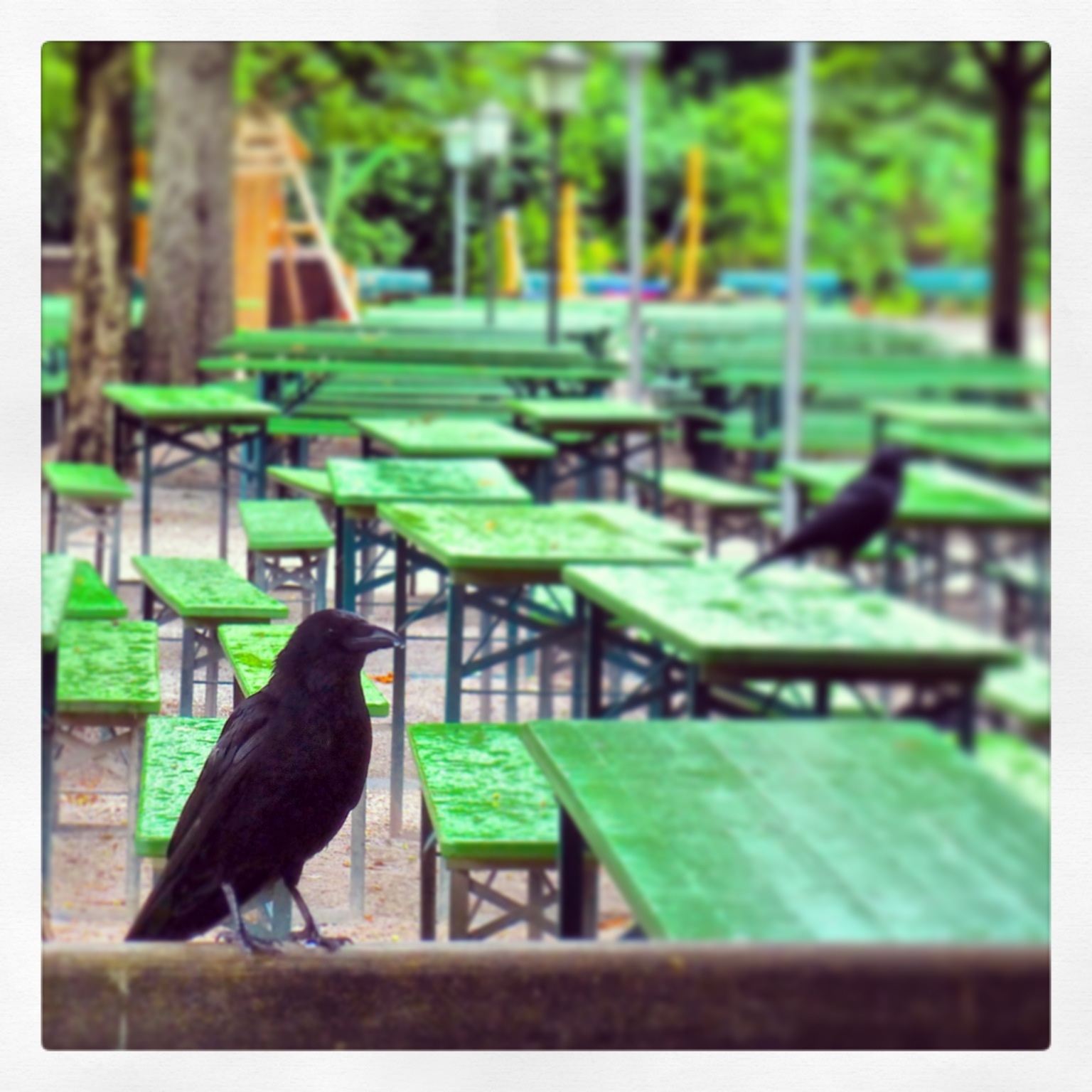 Outside of one of the poshest hotels in Munich, where Michael Jackson dangled his child and almost dropped him, stands a shrine at the base of a German statue.

The bizarre parts: a wealthy elderly lady cleaning the faux grass daily, rearranging. The flowers at the shrine were fresh. There’s a homeless contingent that apparently live in the swath of grass surrounding it, doing chalk art in Michael’s name while wearing his infamous hat.

BUT. Not only that. To the right, facing away from the hotel towards the center, is another shrine. To Bubbles the Chimp. I kid you not. I. Kid. You. Not. Beyond weird.

For public transport, like trams, you can either get a 1-2 stop ticket (a Euro-something) or buy a day pass for 4-5 Euros. I’m guessing it’s not a bad job here in Munich to be a ticket collector, since two stops is about 30 seconds.

We’re halfway through our trip here in Munich, and I’m sure we’ll find more gems to come. Locals, local places and interesting sites off the beaten path. More stories to come soon.