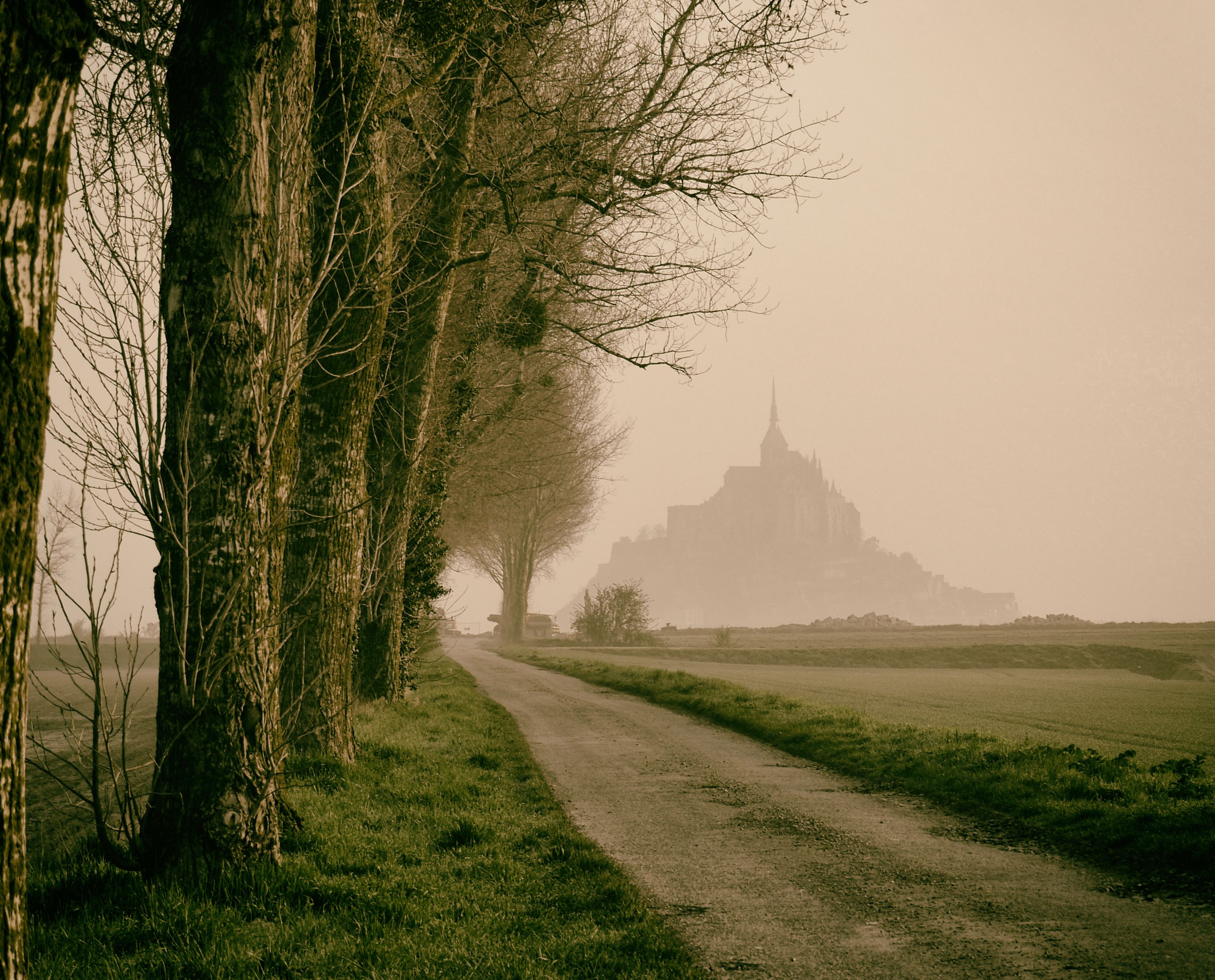 We’ve always loved the French coast, though our last visit was a few years ago. The highlight then, for me, were the sea lions (or ‘big boned’ seals, we’re still not sure, grin). This time we kind of raced from Portugal, through Spain, to get in the area of Cherbourg so we could catch a ferry to Ireland.

I’m actually writing this from the ferry. I think I could be the reason they have to put signs: ‘Watch your fingers and hands,’ since I’m carting fresh slammed-door bruises. At least the WiFi’s good for this 17-hour journey, eh? 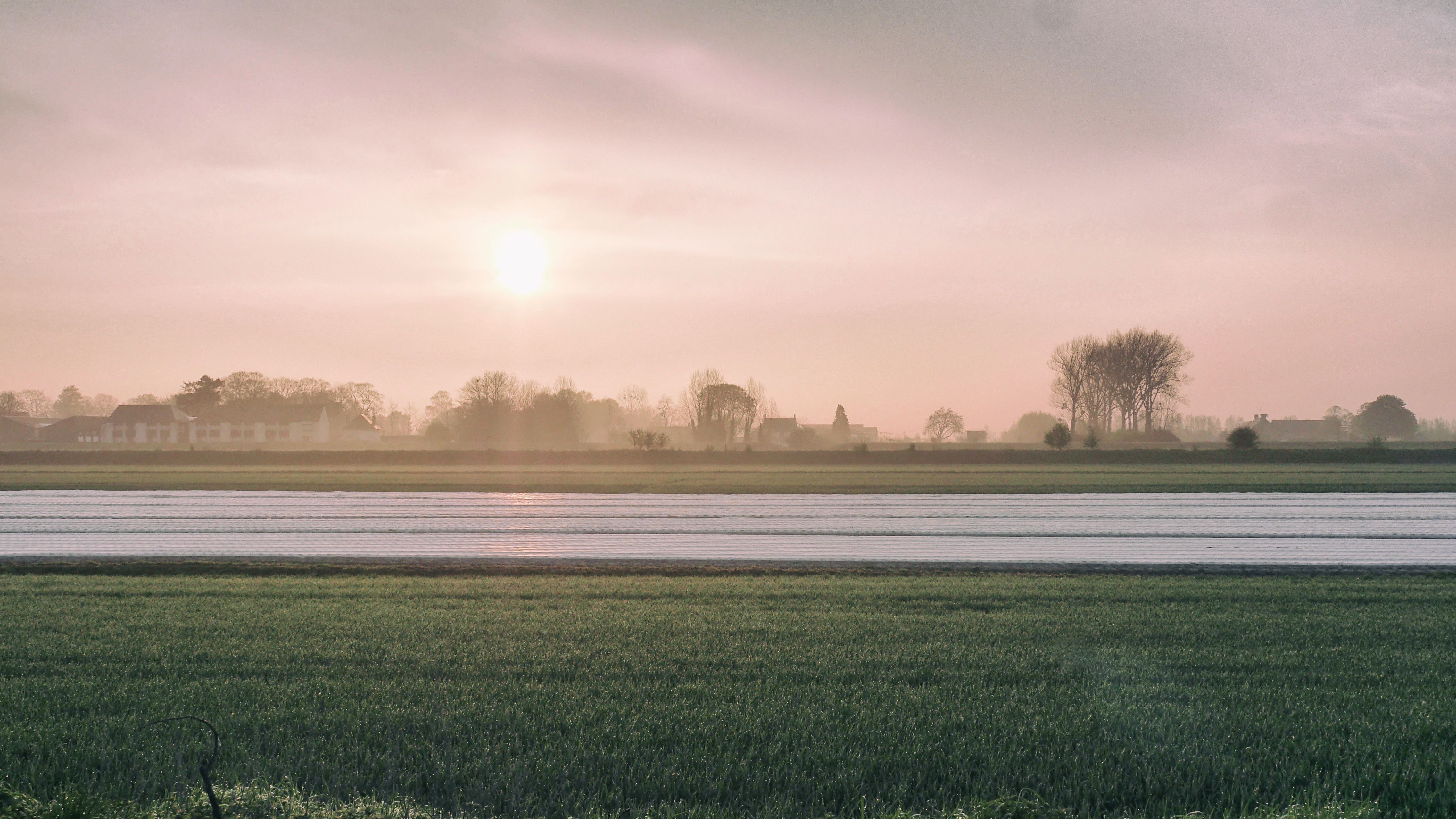 Anyway, for this trip along the the French coast, we really wanted to take more time for the villages, the countryside and especially the war memorials in Normandy.

The French Coast in Spring Stuns

France in spring is heady and hazy with vibrant yellow crops of Colza flowers contrasted with deep grassy greens. The typical bleached-stone villages are softened in the mornings by misty fogs, making even the most mundane tilled fields look romantic. We had a great time shooting (me camera, Armando on drone). 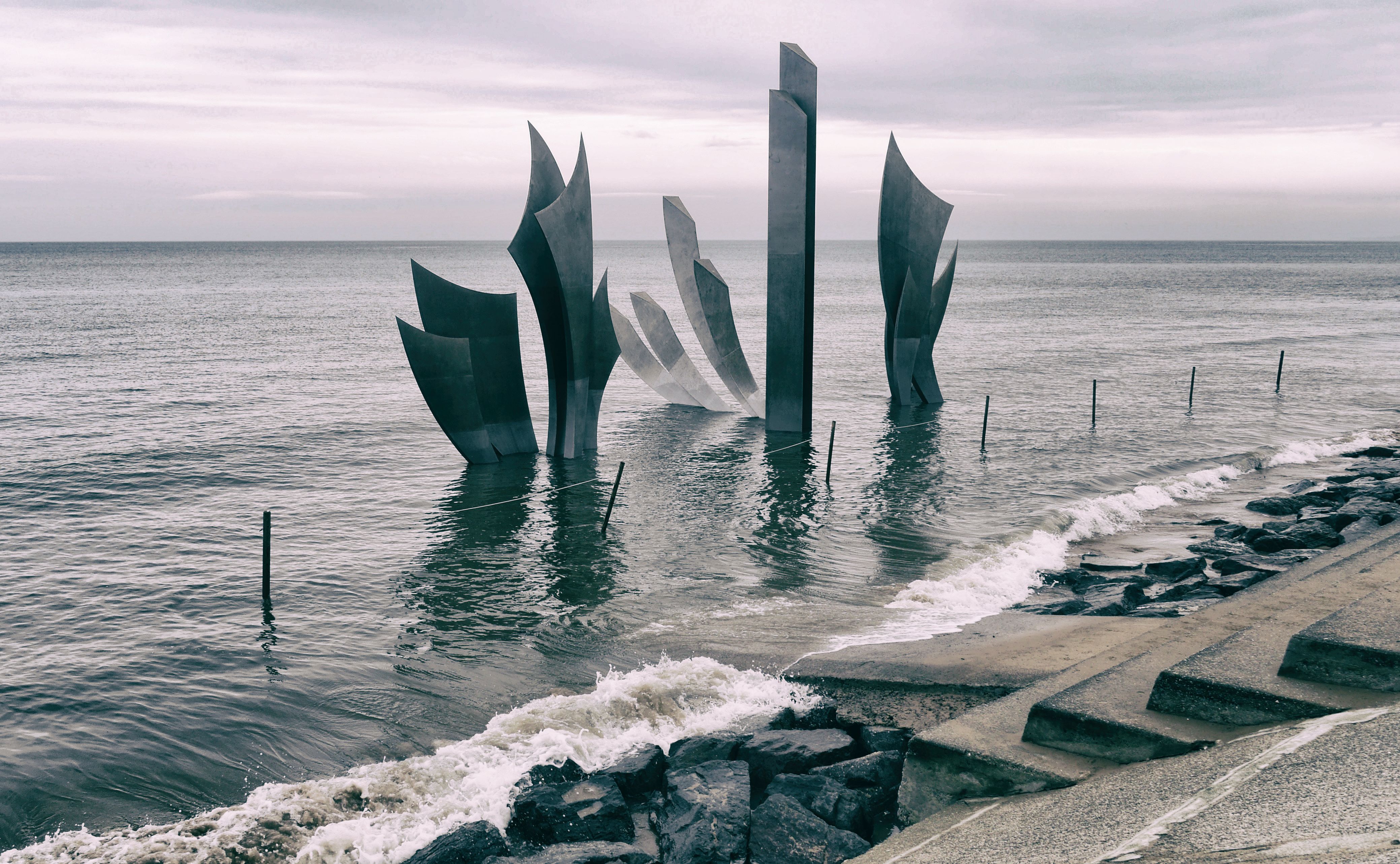 “When you go home
Tell them of us, and say
For your tomorrow,
We gave our today.”

We went to the American Cemetery; Omaha Beach; and the Pointe du Hoc bunkers. It’s impossible to express the mixed emotions and overall atmosphere of such historic sites. Haunting. Somber. Gripping. Humbling.

It was extremely easy to imagine the horror and the loss. But the bravery and courage that it took for men to attempt landing with little hope, or scaling cliffs against constant attack, is unimaginable. 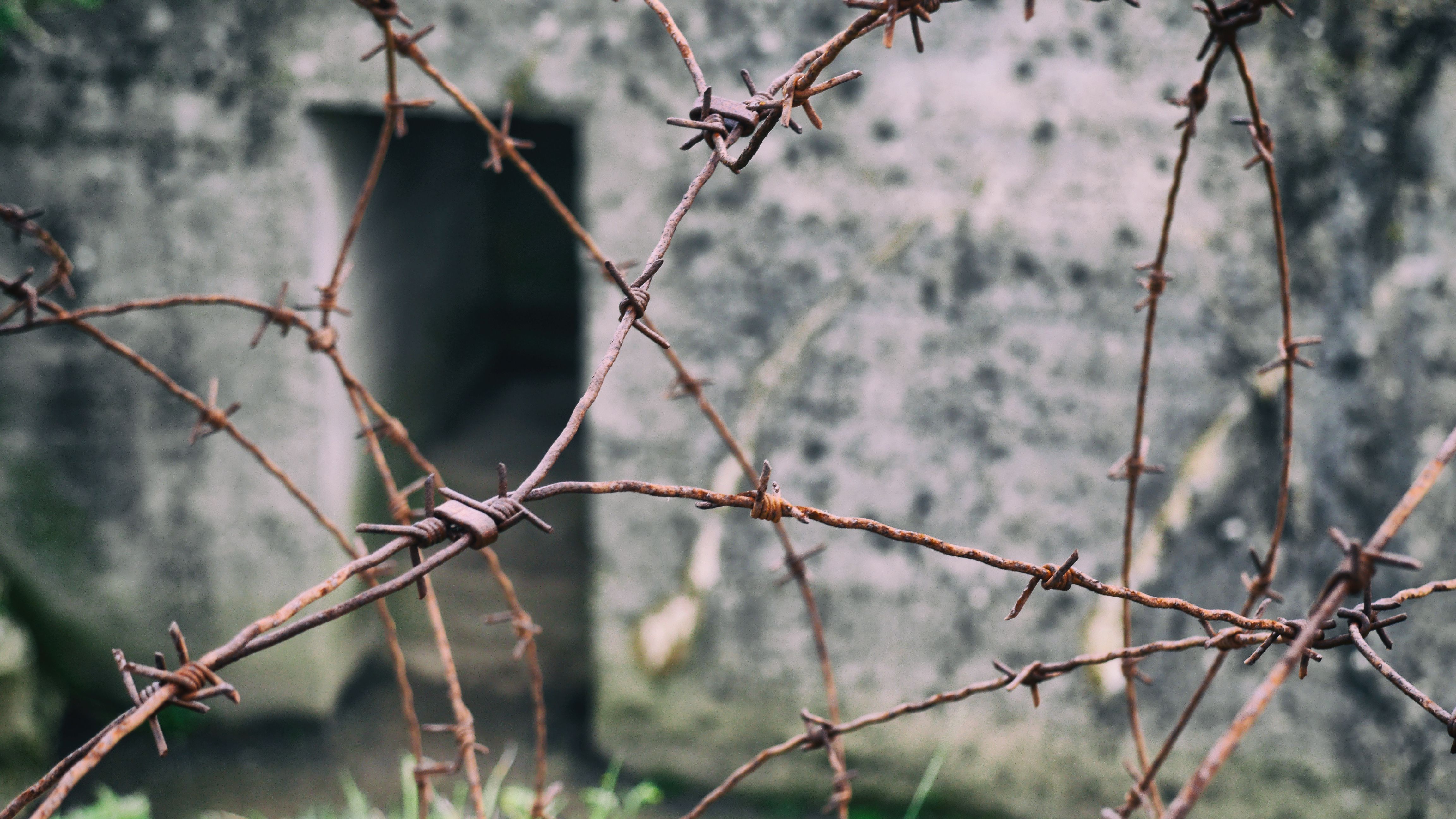 Armando’s thoughts echo my own. We were both deeply affected – and are deeply grateful – to the men who sacrificed so much for the freedoms we take for granted today:

Of course, my first instinct is to read as much about a topic as possible and I found I was – and still am – horribly uneducated about it all. Both World War I and World War II.

For example, I didn’t realize how many countries fought on the Allies’ side in WWII. Britain, the U.S., Canada and France (obviously) might have had the largest numbers involved, but there were many other international heroes on D-Day. 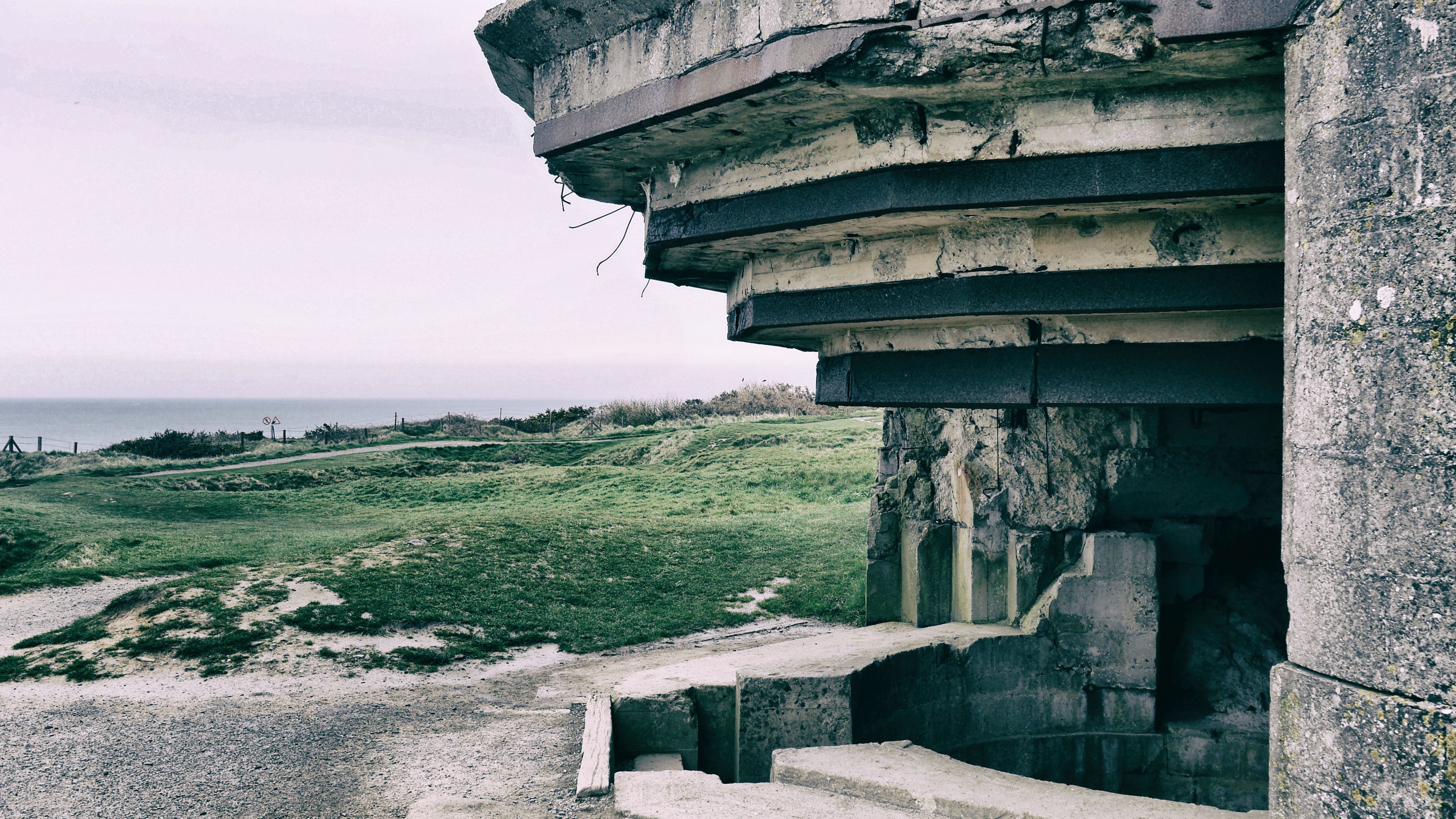 Including (and let me know if I miss any): Belgium; Poland; the Netherlands; Norway; Finland, with volunteers from Sweden; Czechoslovakia; Greece; Australia; New Zealand; India; Luxembourg and South Africa.

It’s difficult to fully comprehend such a simple phrase: ‘The world was at war.’ I wonder if we were faced with similar circumstances today, how our modern world would react.

We had a few days of downtime, just relaxing on the coast. The bay area we were in was a dainty summer getaway place, with small multi-colored cabins and a beach littered with oyster shells and swathes of seaweed. It was surprisingly clean, minus a few concrete chunks left over from defunct outposts and bunkers. It’s a peaceful place.

One thing that surprised us there: the water lapping at our feet almost disappeared within half an hour. An hour later, a convoy of tractors made their way across the newly-arid seabed to work the oyster farms. The workers go out on low tides and flip the oysters, only gathering the fully grown ones. For oysters to be old enough, apparently, it takes 2-3 years. 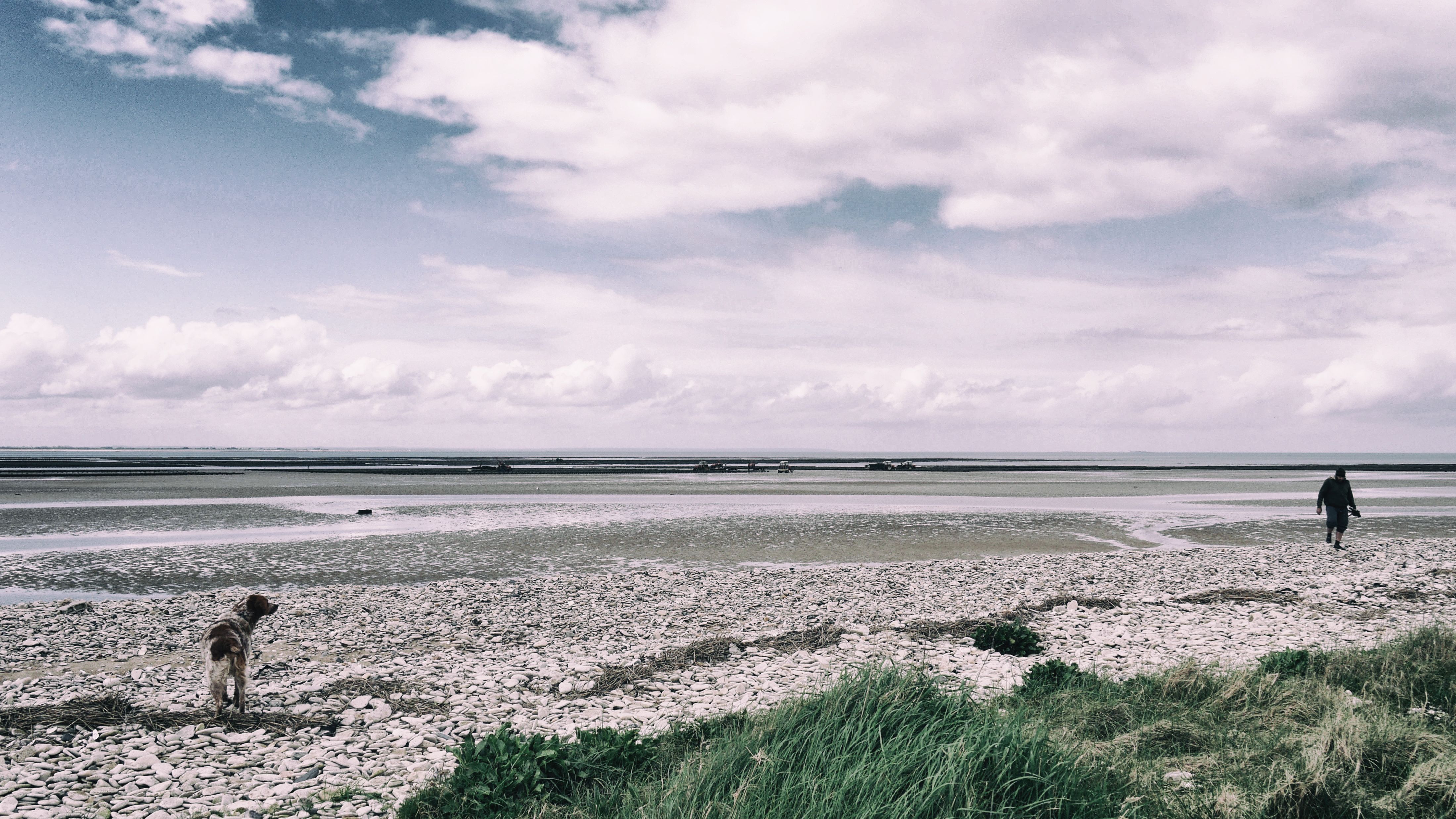 It rarely happens, but I did have a bit of a panic moment. I’d gone for a walk. When I got back, Ziggy was in the van, but Armando wasn’t. His drone, his tripod and his camera were all there. Most disconcertingly, his shoes and socks were set under the door.

I figured he’d either a.) gone to mingle with the oyster farmers b.) was hiding in the bushes, waiting to jump out and scare me (wouldn’t be the first time) c.) spontaneously combusted or d.) had something super nefarious happen, involving an axe murderer in a beret. If you guessed ‘a.),’ give yourself a pat on the back.

Ireland, Get Ready – Here We Come!

As I’ve mentioned, we’re on the ferry to Ireland. We’re both pretty excited for it, with one of the main reasons being we’ve never been there together before. I’ve only been once (to Cork for St. Paddy’s Day, years ago), and I remember falling in love at my first glimpse of the countryside.

There’s just so much to see and do. Beyond the gorgeous landscapes and seascapes, there’s the historic sites, like the megalithic stones and abandoned castles. The natural wildlife, including whales, puffins and dolphins. The bubbly and passionate Irish culture… we don’t have a clue where to even begin!

I have a feeling our short time in Ireland probably won’t be enough, but we do still have Scotland and the UK (Busfest!), too. Wish us luck and follow our journeys through Eire! Mel, Armando, Ziggy & Mork 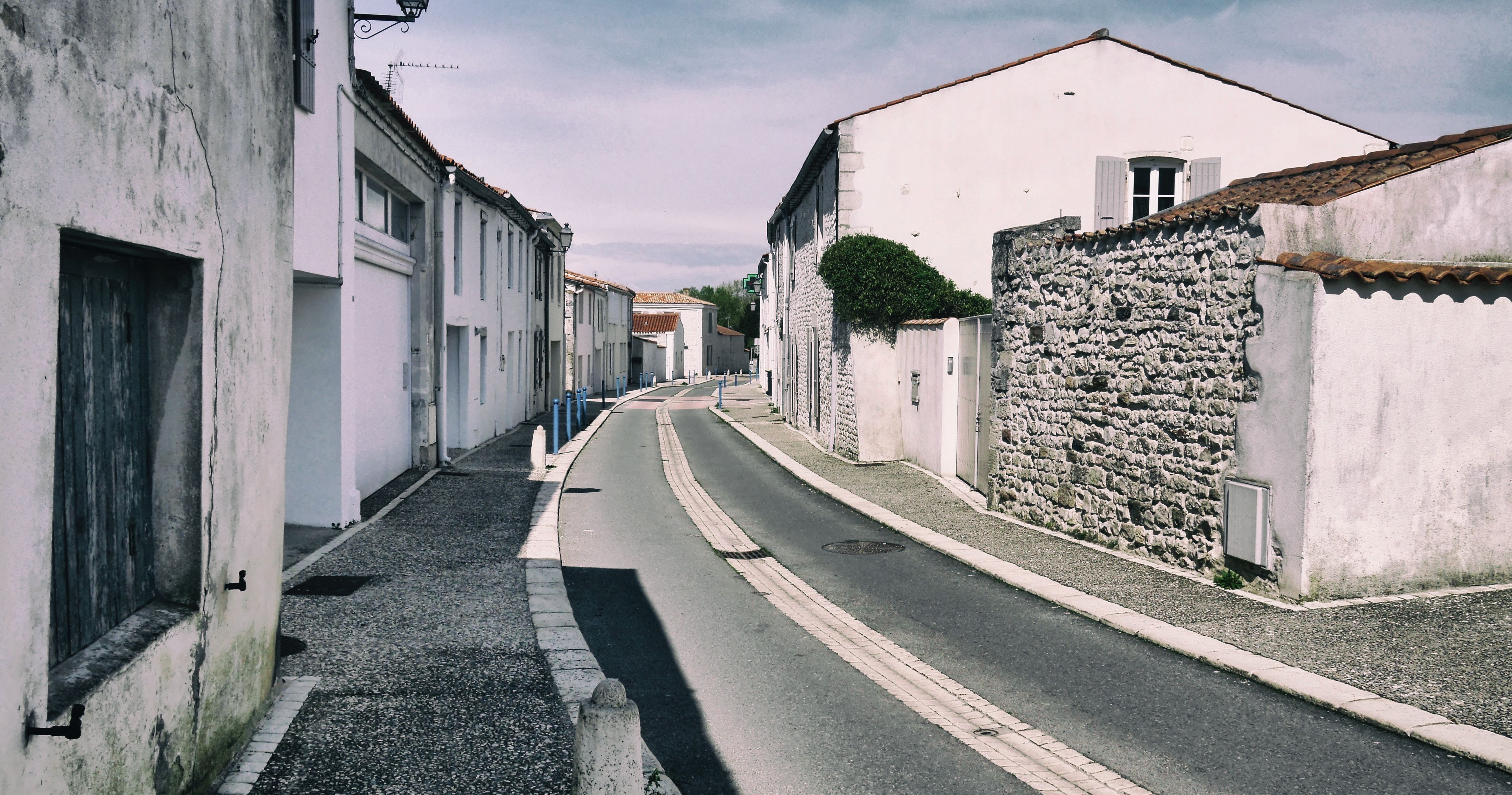 What about you? Have you ever traveled the French coast or Normandy? Have you visited the D-Day beaches? What was your impression?

Any tips of places to go or things to do for our Irish exploration? Unique favorites or quirky local legends. Anything that comes to mind.  Grin. Let us know in the comments below. We’d love to hear from you!

Vanlife with Dogs: The Challenges and Rewards