By Mel Candea on October 26, 2012
The hostel is brilliant for not just exposing us to different people and lifestyles, but also for the great suggestions we get for what to do and see whilst whiling away our time in Istanbul.

We’ve kind of bonded with a few people that have been here since we arrived, and one of them, a Syrian, suggested we visit the Princes’ Islands. 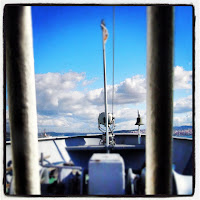 A neighbor also suggested it and we made loose plans to go together.

A bit of details: there are 9 islands, but only 4 that are visited. No cars are allowed. You can rent bikes, rent a horse taxi or walk. We opted for the 3rd island, Heybeli (‘Ada’ means ‘island’), pretty much on a whim.

We packed up our bikes, sleeping bags, tent and off we went to catch the ferry last Saturday morning to the Princes Islands’.I don’t know if I’ve mentioned my glaring ineptness at cycling-? Worse than terrible. 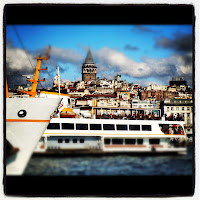 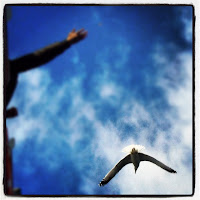 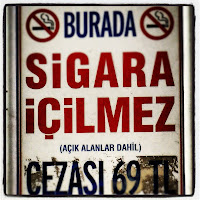 I managed to survive the ride, in the city to the ferry, with only one minor shoulder scrape into a parked car and one near-miss with a rather slow tourist.

We’d gone too far, so had to take a ferry to get the right ferry. A lot of confusion, thanks to the helpful Information booth that sent us to buy bus tickets.

Which we couldn’t trade in, and had to buy ferry tickets anyway. A little bit of a grumpy start to what would turn out to be a soul-soothing experience.
(a ferry warning not to smoke: we wondered how they came to ’69 Lira’ as a fine-?) 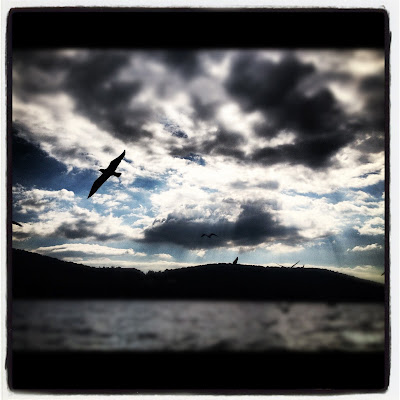 The seagulls on the way there were pretty insane, and I’ve got a bird fixation, so I took tons of photos of the little searats.

When we arrived on Heybeli Ada/Heybeliada, the first thing we noticed were the restaurants on the mini-wharf with painted ‘no cycling’ signs on the walkway.

And a man cycling across them. 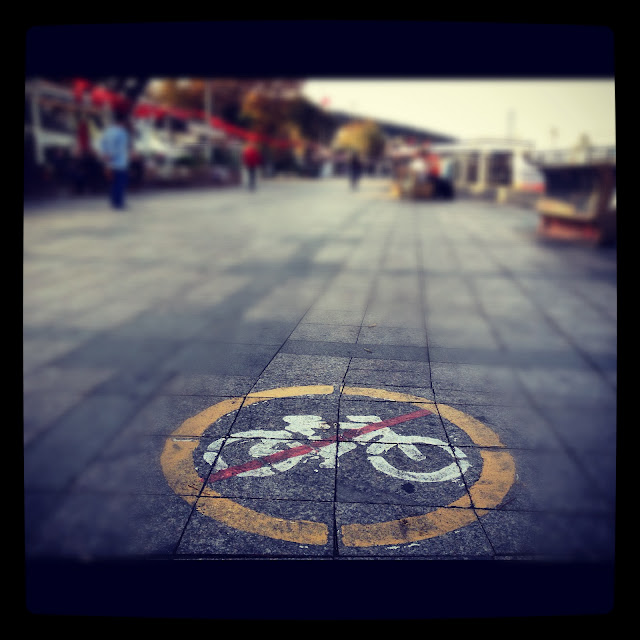 Typical. We had no map and no idea what to expect, so we sort of wandered/rode around. It was: eerie.

Lots of doesn’t-quite-fit things, like the Colonial architecture that reminded me of run-down southern mansions. Or the horse carriages, and the loose horses running around. 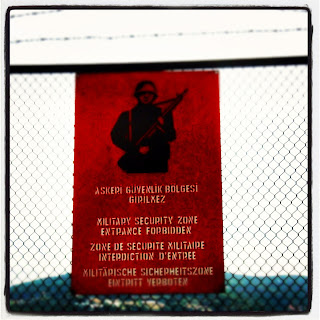 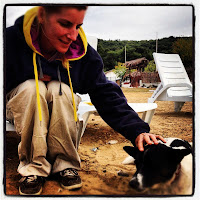 We rode the full length of the island, pausing a few times for photos. And breath for me, I was dying.

Island hills are not my friends.

We also saw the military compound (it takes up at least a 3rd of the island) that was uber-creepy and issued with the standard gun-toting guard.

We found out there wasn’t a campground available, but we could camp, wink, wink if we were careful. We’d seen a few semi-empty beaches, and on one picked up a stray dog that Armando dubbed Funky.

As bike riders know, your hearing gets dodgy on the wind and I heard Punky. We settled on Unky. Loved that dog. He split when we got back to town. 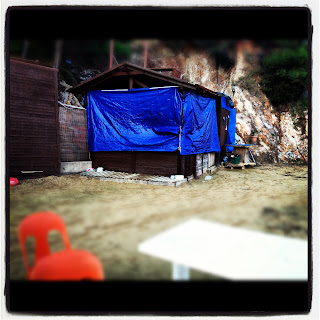 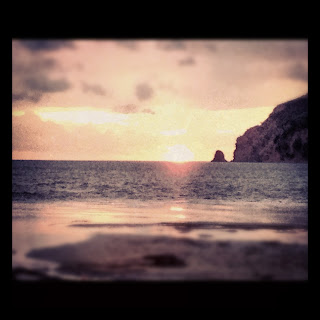 Armando fished awhile, but it looked like a storm was rolling in so we wanted to get our home base. We bought a few supplies and went the same route we’d taken, hoping for an anonymous camping place.

We found a completely abandoned and secluded beach, with lounge chairs still set up from the summer crowds.

A small shack was at the end, wrapped in blue tarps, officially closed for the season. Perfectness.

We were rewarded at the end of the day with one of the most gah-inspiring sunsets. Inside the shack, we found electricity and coffee, a Backgammon board and a stereo. Our night on the beach was spent playing Backgammon and drinking wine and coffee.

It was the first real silence we’d had for almost two weeks. It was a necessity at that point, for both of us, to be embalmed in calm.

It began to rain, we ended up sleeping in the tent praying for better weather since it’d been bone-cold chilly for most of the avo and evening. It was freaky, I’ll be honest. We shouldn’t have watched the ‘Chernobyl Diaries‘ the week before and we couldn’t stop making comparisons with Psycho/Lost/the Island of Dr. Moreau… The night-time sounds were scary. Sometimes there can be too much silence. 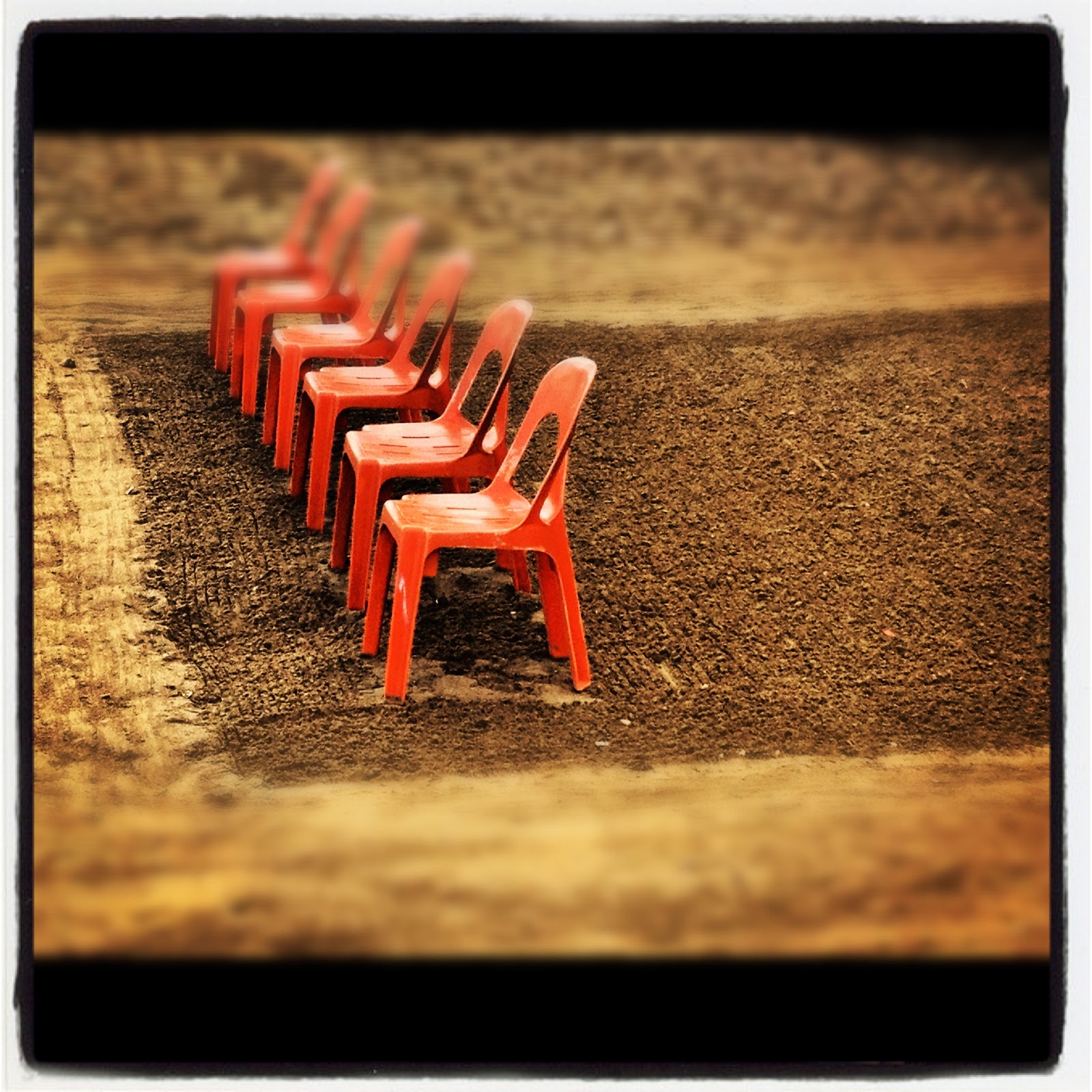 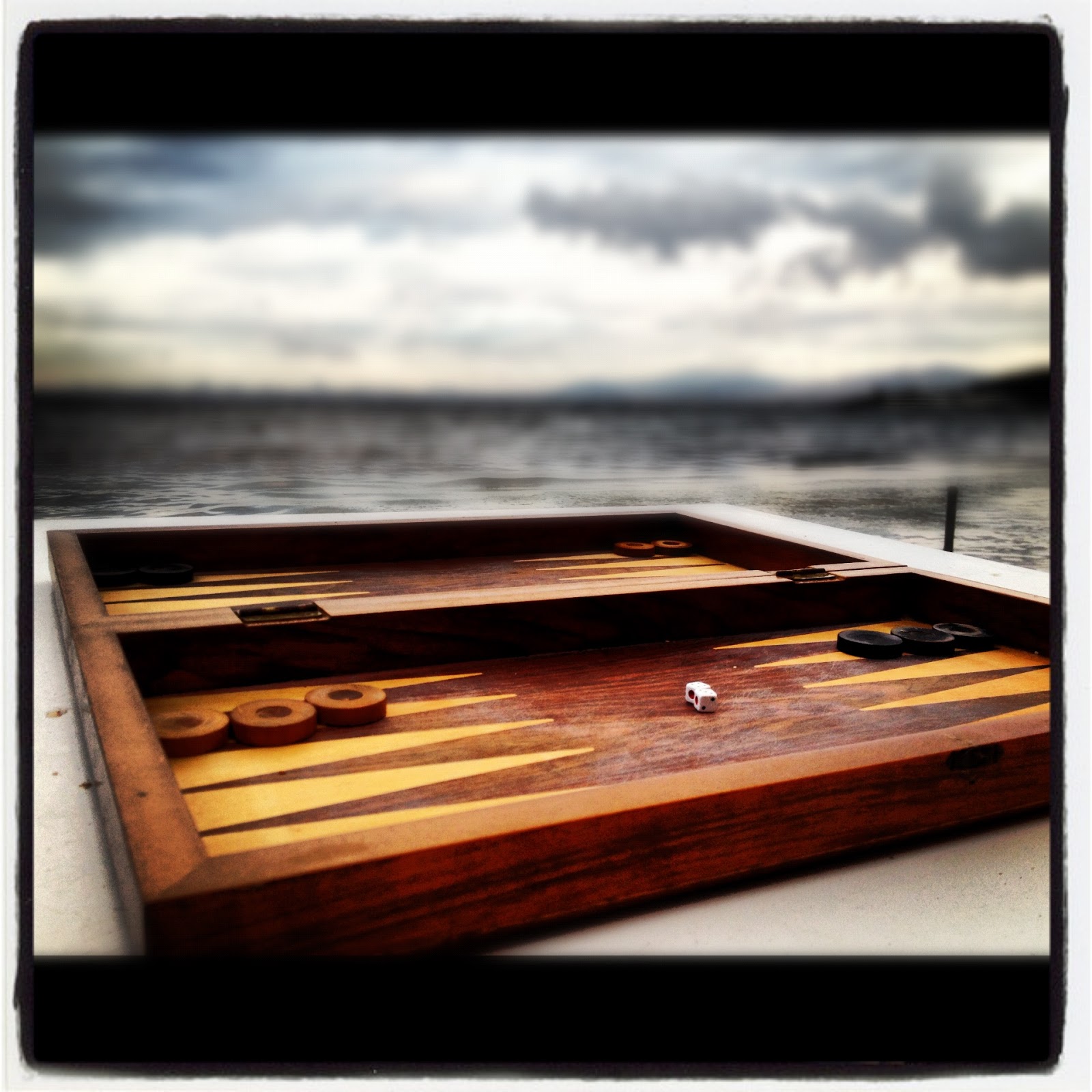 The next day was a Hair moment: Let the Sunshine In, with a grin. We opted for the second beach we’d found, to get direct sunlight and just lounge.

Just a few days ago, we were in bathing suits wading in the sea.

Amazing. It was a nice afternoon- he scrounged through some fisherman castoffs, finding a metal fish holder; a weird grill; tons of pieces from a net for his new street project. I found shells and stones for some jewelry I want to make. Two old fogies passing a sunny Sunday.

The Princes’ Islands, or our time on Heybeli, was exactly what we needed. A golden moment to balance the hecticity of Istanbul. We’ll go back, just to a different island. One that doesn’t give us the hopping heebie-jeebies. Huge grin. Well worth the trip.
Share on FacebookShare on TwitterShare on Linkedin