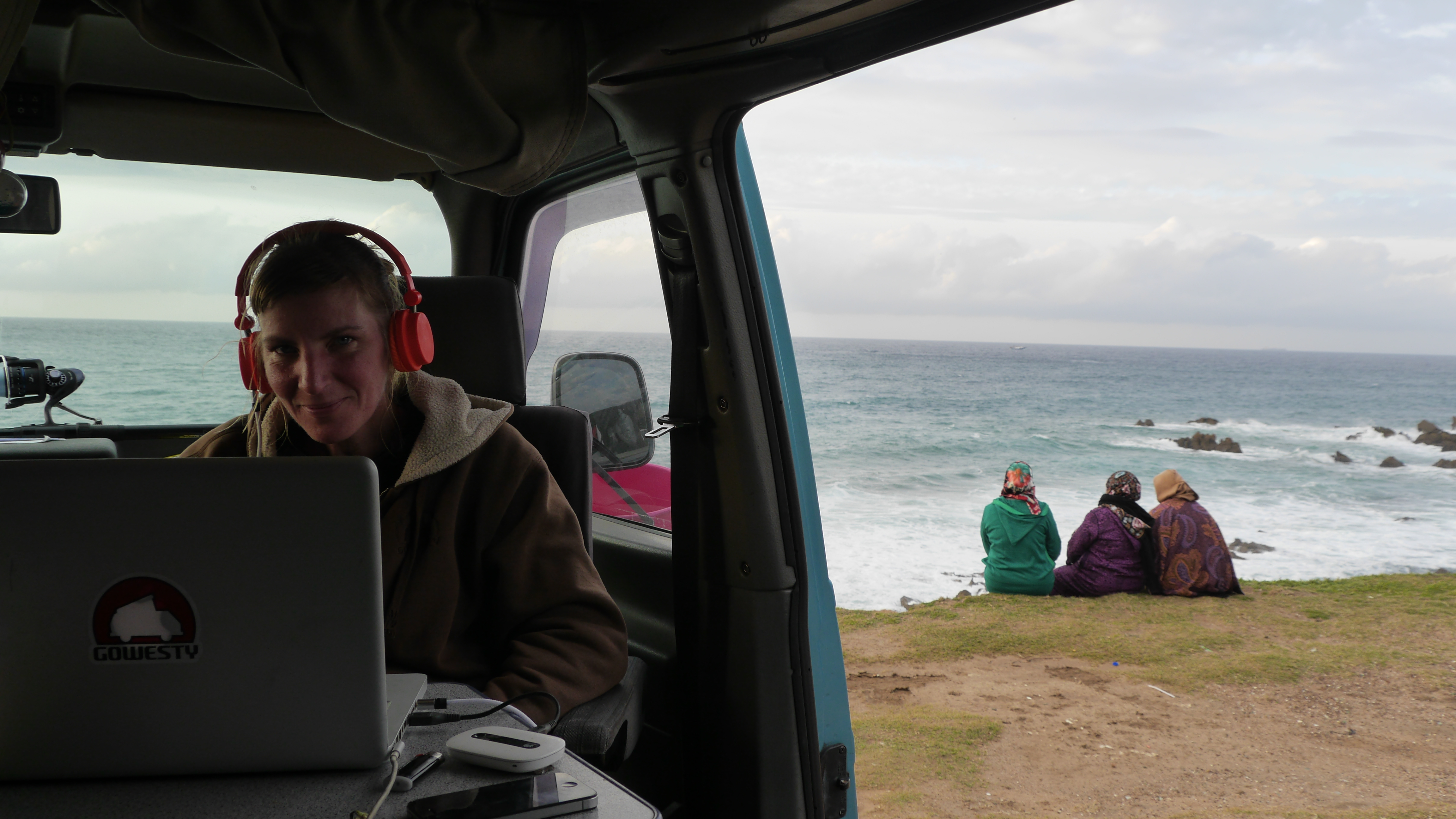 I think it’s fair to say we’ve been a little coddled in our European experiences. The cultures are very diverse and fascinating, but there’s this underlying ‘Euro’ feeling.

Maybe it’s the transition from leaving Portugal’s laid-back surf-vibe crazy English-speaking skills to venture to a country that speaks French and Arabic. Or maybe it’s the uniquely-Moroccan robes that all of the cool kids have. Quite possibly, it’s just the camels.

We’re in a campsite called ‘Flamants Loisirs’ in Moulay Bousselham (I dare you to try saying that in your head without a French accent, a la Pepe) for the night. Armando needed to work and we’re both still getting accustomed to people coming up to Mork.

We’re not used to having so many guests visiting. They’re all usually offering or asking for something. If they have a yellow vest, they’d like a token of your appreciation (from 5-40 Dirhams, or $.50-$4.00) to park. Anywhere. We even parked in the middle of nowhere and joked about a parking attendant ‘all the way out here, heh heh heh.’

Lo and behold, just over the horizon came the neon-yellow symbol of the parking man.

So far, we’ve been offered a plethora of hash, even snagging an invite to one fella’s family home where he has ‘bricks’ we can buy. One fella offered to help Armando with putting trash bags in the van (more on that later) and expected a tip. We’ve been offered fish, we’ve been asked for shoes, twice (?) and as of yet, no. No one has offered a fair trade of 3 camels for moi. But hey, it’s still early days. 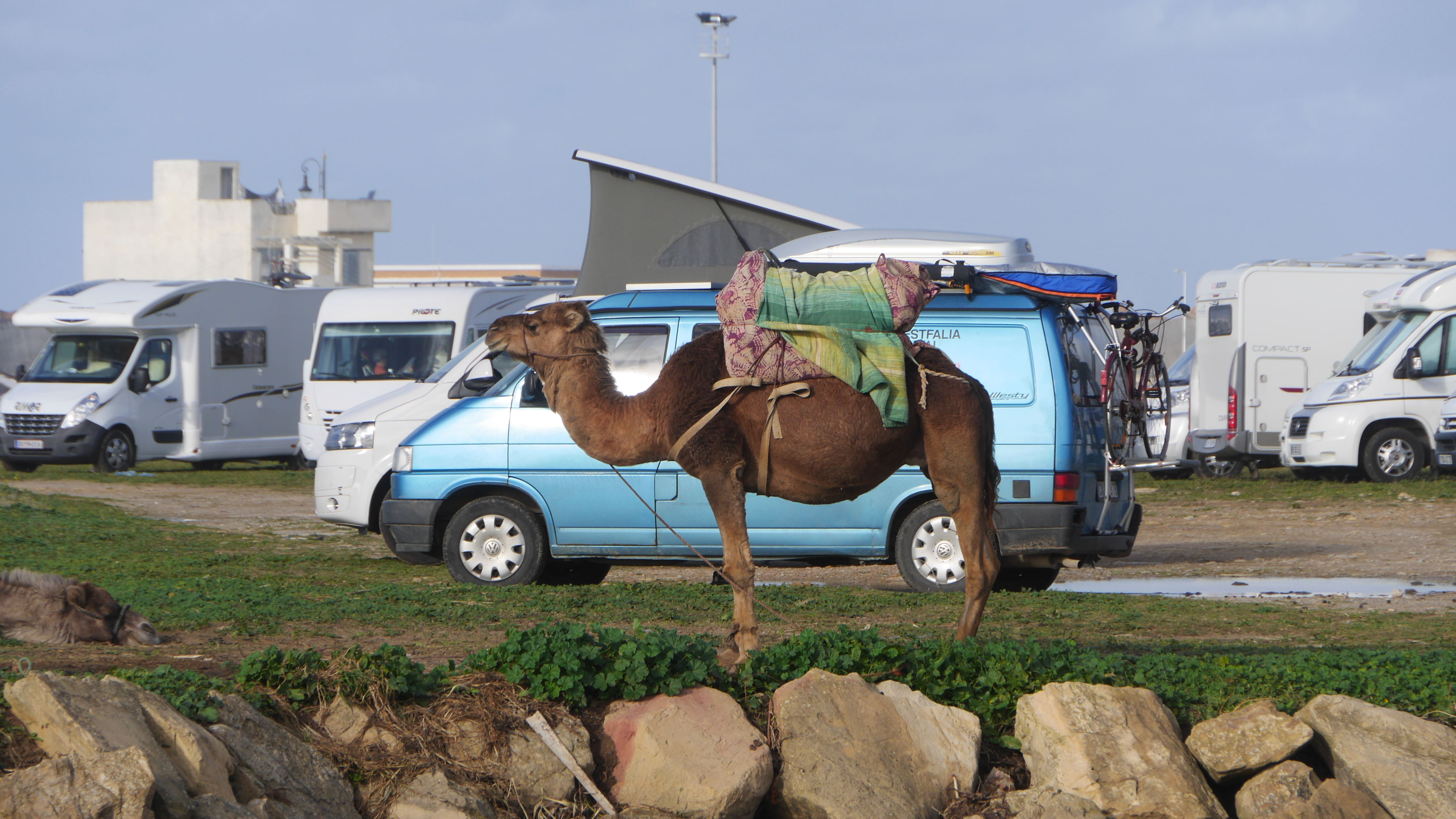 Camels are cool. They’re regal, stinky, awkward and gawky. And they manage to convey an aloof sense of superiority, as if their only thought about you contains the word ‘peasant.’

We’ve been in an Arabic country before (Istanbul, Turkey), so we thought we were pretty well prepared. The Muezzin’s call to prayer; the stray cats; and the men dominating the streets and coffee shops.

But there is already a very strong sense that this experience will be Other. Probably more in-depth. A deeper experience.

We weren’t prepared for the poverty. Roadside stalls are built like shanties, barely propped up with tarps holding them together with frayed ropes. Garbage is littered literally everywhere- and yes, I’m using ‘literally’ correctly. In Asilah we were told by one of the camel drivers that the economy is so wiped out, tourism is the only way the people who live there can earn money.

Maybe the parking attendants and the expectation of gratuity for any outside help isn’t greed, after all, but need. And it’s part of the culture. We came here to have a unique cultural experience, not for proselytizing ours.

It’s difficult for me to not judge, however, when it comes to simple things. I don’t exist- Armando does. Part of it is he speaks French; a larger part is that he’s got the correct dangly bits. We haven’t been to any of the large cities, which I’ve been told are much different.

Another thing: even wearing jeans, shoes, and my hoodie, I still feel underdressed. Over-exposed. I might have to invest in one of those robes the cool kids wear, just for my own comfort.

The campsite has been interesting. A farmer ran his sheep through to graze; random chickens pop up where you least expect them; and the toilets are ‘Turkish’ in style. It’s colorful and adds to that ever-growing Other sense.

On the eye-candy side, my goodness gracious me is this a stunning country. It’s vivid, and wild, and stark. The colors burst from buildings, from scarves, from the copper-red and green fields. I can’t remember being in a place so visually overwhelming. Photographically gratifying. I think you’d have to be horrifically talented to take any bad shots in Morocco.

Lastly, back to the garbage. It’s kind of a ‘thing’ with us that we leave the places we park better than we found them- we always try to pick up excess trash, no matter if we’re at the seaside or in the forest.

Armando had a particularly- dunno, productive?- day yesterday. We were parked across from Larache on the bay, and there were massive amounts of garbage. I truly, madly, deeply mean massive amounts. An hour and 40 bags filled later, Armando had cleaned up the two areas of the beach next to us. This morning we made two trips into Larache and dumped them off at what ended up being 4 full trash bins. 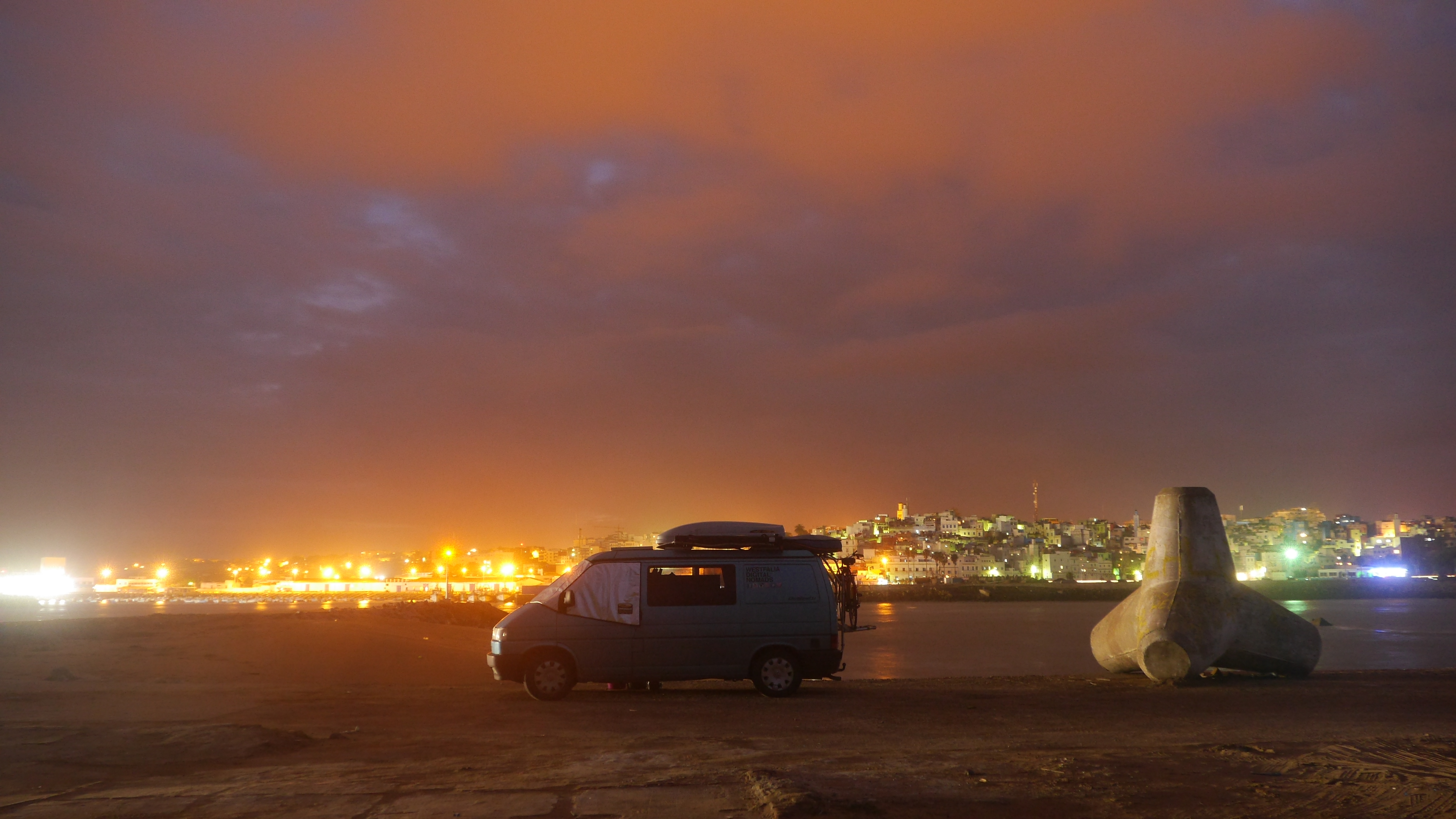 Several people have asked about Morocco’s recycling program. I haven’t as yet seen any recycling bins, but that doesn’t mean they don’t exist. We have had some difficulty finding any trash bins, at all, in most places. We’ve actually driven around for quite a while before hitting pay dirt. It’s like a treasure hunt.

If it’s that difficult for us, I can only imagine how difficult it might be for people to get rid of their personal trash, much less being able to do as much as Armando did.

If I ever find any recycling bins here, though, will let y’all know. Grin.

It’s almost sundown now. The sheep have been put to bed, the strays are on the prowl and I’m going to go take some more eye-candy shots.

B slema until our next Moroccan adventure. And thanks for being a part of our travels.