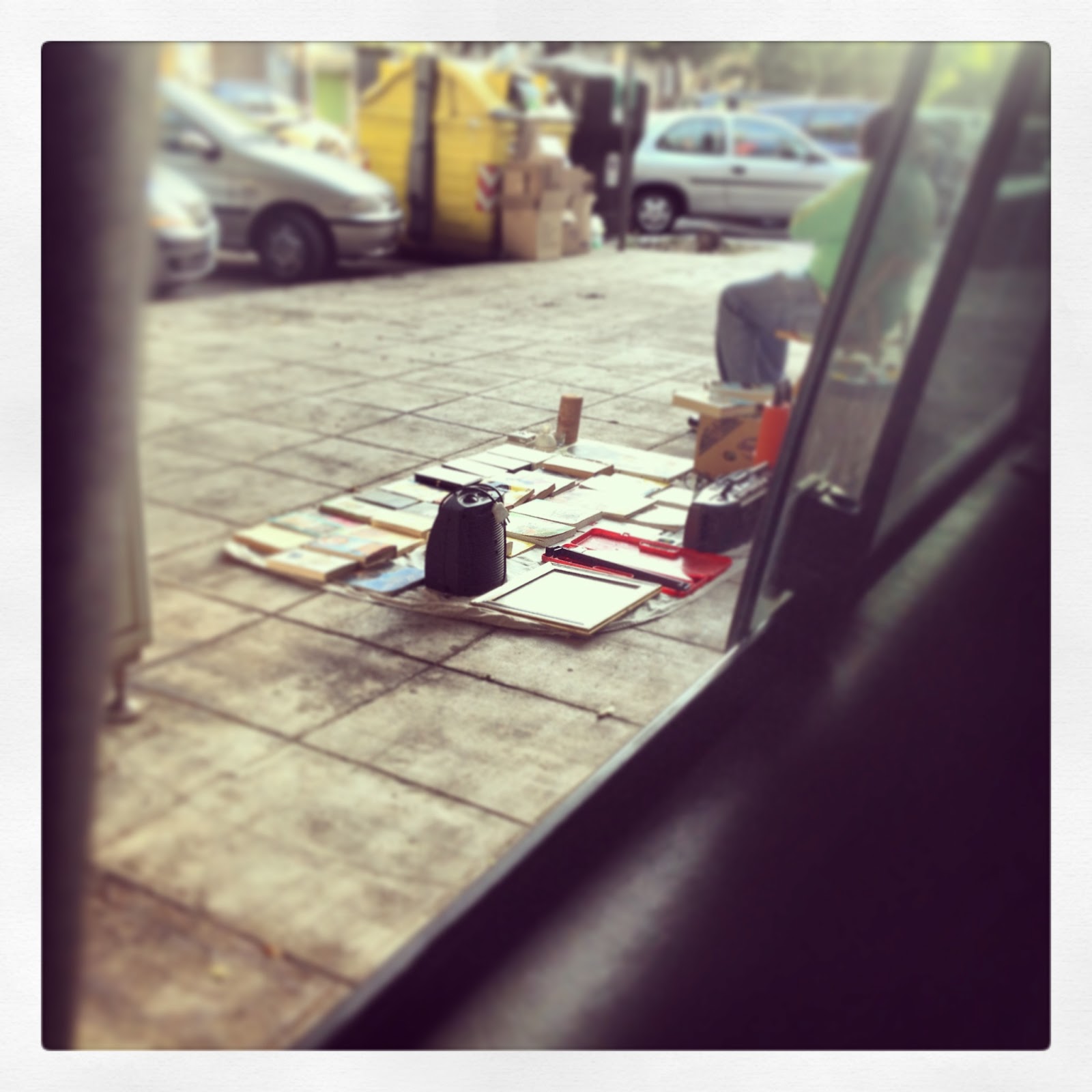 To continue with how engaging and unusual Palermo is, we need to go into a little background on where we actually stayed. We found Palermo to be similar to Istanbul parking (as in there’s none), with a lucky happenstance of next to the hostel we were friendly with.

The parking place itself was a fairly quiet side street (back-out only) that accommodated an impromptu and most likely illegal free-for-all flea market. 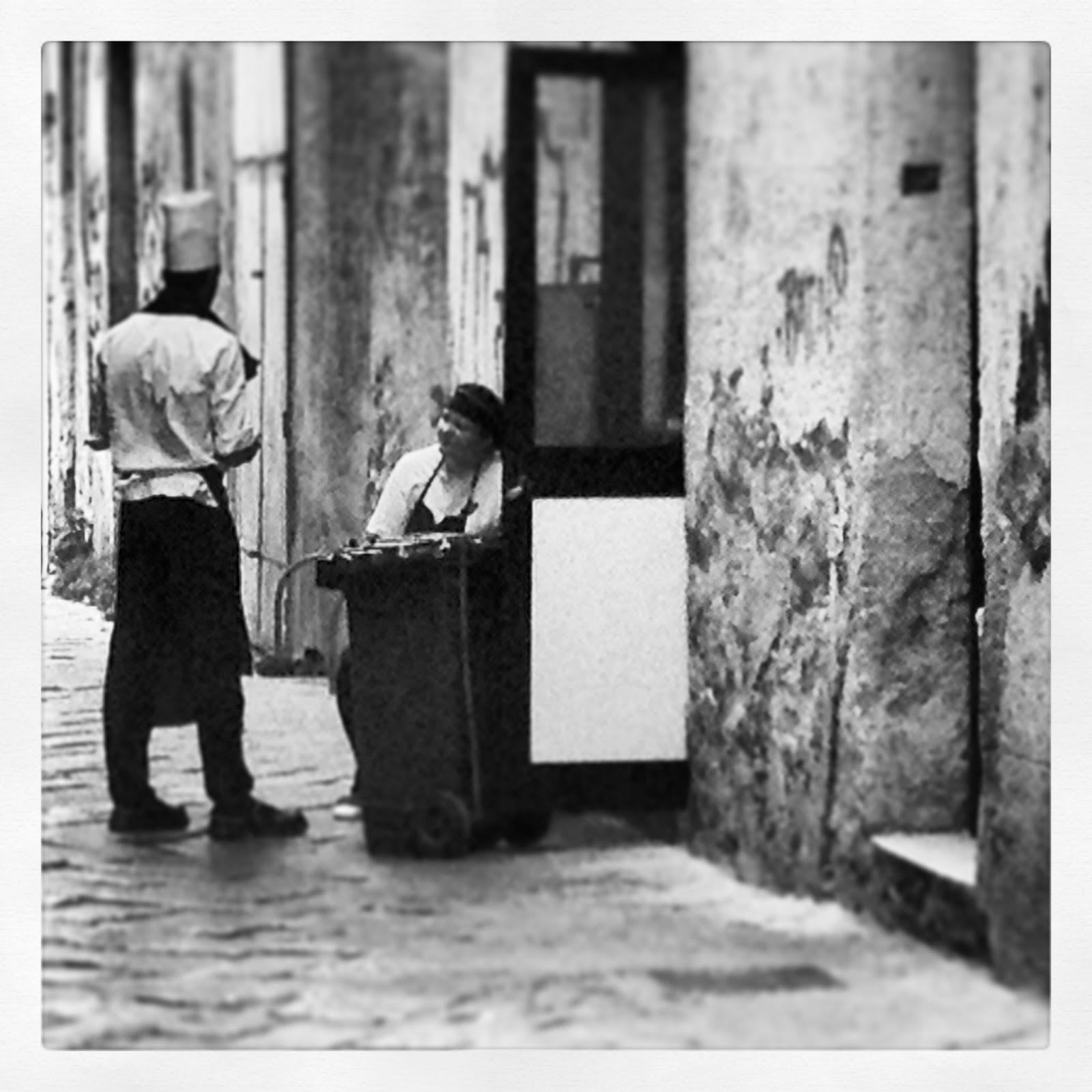 We’d open our door each morning to a few early bird entrepreneurs. A very worn elderly couple that hawked everything from old shoes (from the looks of them, not formerly theirs) to home-made VHS video tapes with TV labels.

Across from them was the thin and elegant Sicilian man, who sold sewing goods to the grannies of the hood. While I was slow-roasting in the humid 80+ heat, he strode around in jeans, a long-sleeved (ironed) shirt and a striped woolen blanket. A true Sicilian, complaining about the cold. Grin.

A last thing I noticed were the so-called ‘re-parkers,’ which are semi-illegal parking attendants that help people park their cars. Or repark, when the metermaid/meterman is on the way. 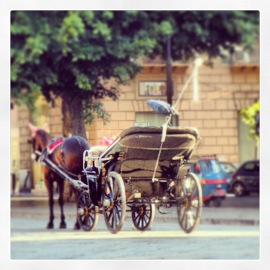 The hostel was amazingly cool, ‘A casa di amici,’ which was peppered with paintings, drums and quirky photos.

The owners, Claudia and Santo, are both art lovers and passionately artistic. They’re also incredibly warm and welcoming. The staff includes their mother, Mrs Vitale, Dario and Laura from Spain. A collection of unique personalities that gel seamlessly.

Towards one of our dead-end streets was the local fish and fruit market which definitely was reminiscent (on a mini-scale, mind) of Istanbul’s markets.

The other end led towards one of the main streets, where there were parades and street fairs held, depending on the day. One early evening walk, we were surprised by a mixture of colorful groups that included Scouts, nuns, priests and different congregations marching together.
A disembodied woman’s voice intoned one half of a prayer, they replied in the same monosyllabic tone, which as a whole was unnerving. Yet intriguing. On the whole, creepy with rainbow colors. 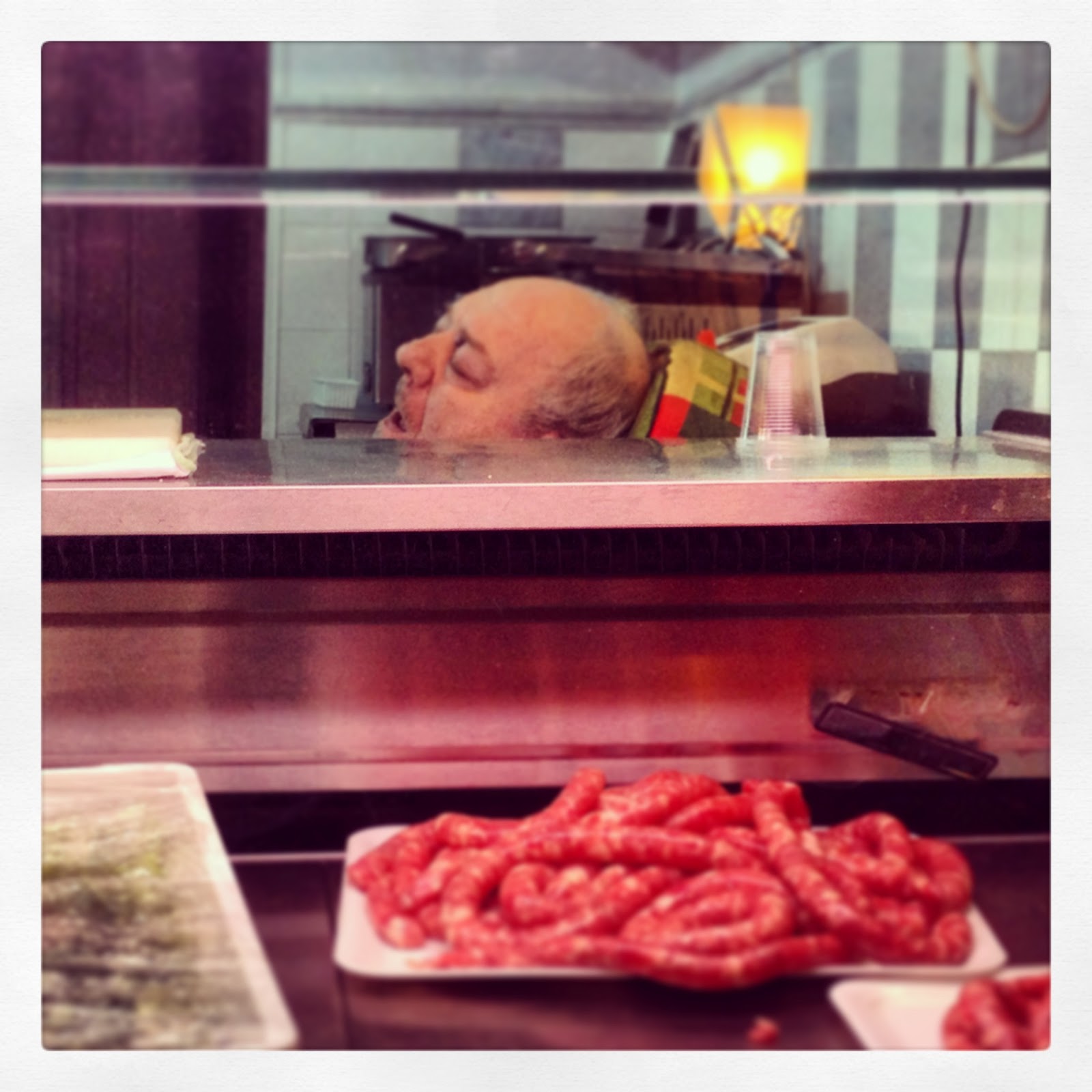 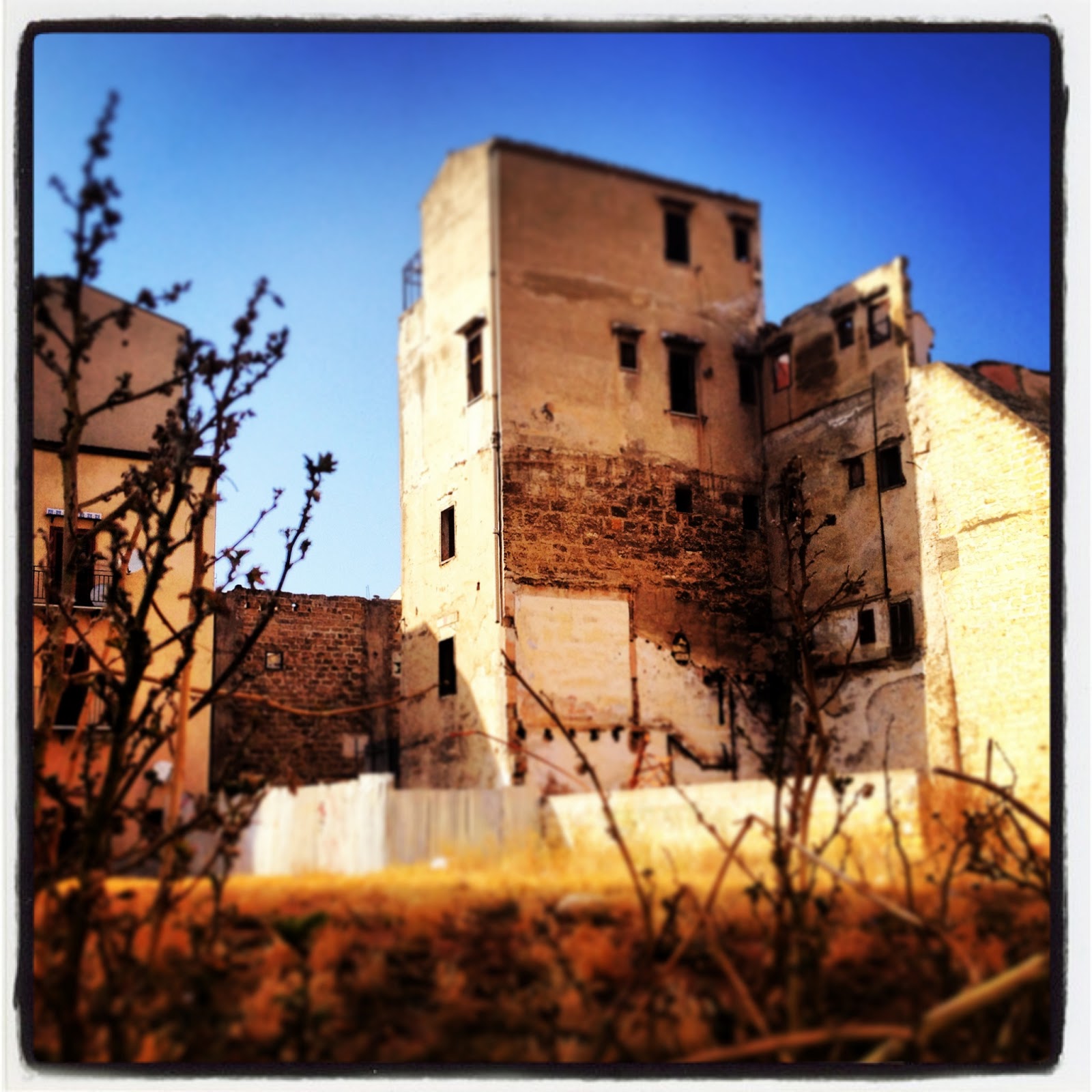 Palermo’s also got a great nightlife, that can be either what you’d term a typical Italian neighborhood by Hollywood standards- or the real thing, with an over-crowded neighborhood of regulars that come in from all over the city to meet every Friday.

The meats are cooked on open-roasted grills, smoking the air. The sound levels are ear shattering (100 Italians all chatting and letting off Friday steam simultaneously tested my hearing) and the joy is electric. We had a blast.

We also took a walk down to the port one afternoon, where the parks and beaches were filled with football games, families, a lot of kites (it was a windy day) and a view of the large port. I found it interesting that you could go horseback riding along the beach: for about 20 feet, straight line, led by a fella who wore costumey jodpurs and a sour expression. And then back again. Ha.

We left Palermo with warmth, and both would go back to visit in a heartbeat. (Thanks, guys)

From one extreme to another- our specialty, I suspect- we went from bustle to the boondocks to visit Armando’s friend Damiano. They’d gone to school together, ran into each other in Palermo and it turned out he was a fellow ‘vandweller’ and invited us to visit. 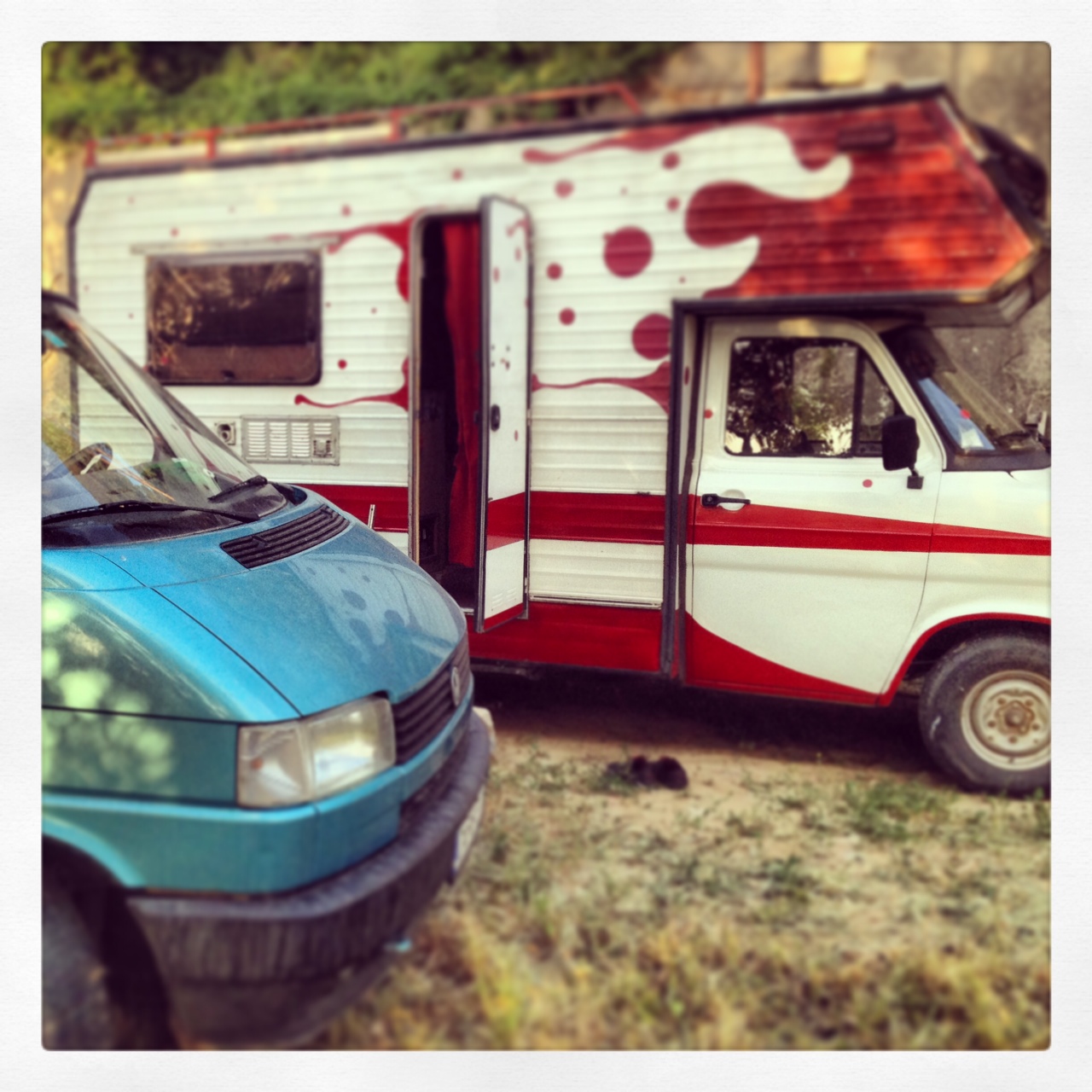 His home was located in a remote village on a mountaintop outside of Palermo. The silence and the natural beauty were perfect contrast to our city experience. Damiano is a professional (and extremely talented) blacksmith, and we chatted over a small fire while eating grilled meat and salad.

He later played his accordion for us. Surreal, sitting in Mork, bellies full and listening to ‘That’s Amore’ in the middle of the mountains. We had a lot of fun.

Two days beach side, ferry ride and bam. Within such a short time we’ve arrived back at Paola’s Trullo in Puglia, Italy- one of our second families. I’ll catch you up on other things (we’ve recently had bad news followed by good news and new directions) later as I’ve already rambled on enough.