By Mel Candea on July 9, 2013
With our lifestyle, there are bound to be some moments that are sketchy, or perhaps even dangerous. We’re a likely target, or more like Mork is, since the license plates are Bulgarian and we have bikes on the back. Here is how we get robbed in Prague.

You can’t really advertise, in neon, ‘tourists’ more than that. Yet in one mere hour away- one fell swoop- we’ve lost more than just the glass from Mork’s window.

At first, we were in shock and didn’t notice the missing backpack. The one holding Armando’s camera; his digital recorder; his bank papers; or the missing tripod. In other words: his livelihood.

What do you say to someone that’s just lost not only his history with his tools of the trade, but our future possibilities?

Vienna’s sound on the videos he’d taken wasn’t uploaded (it’s on the recorder, planned to do it in our free time here in Prague). All the footage we’ve been taking- poof. Prague disappeared.

The worst aspect of this isn’t just the numb shock I feel at Mork being busted up (as I write this, waiting for the police, little glass shards are tinkling down in the breeze). The worst is seeing Armando’s devastation and being powerless to help in any way. He didn’t just lose things- he lost work. He lost his moments. He lost. 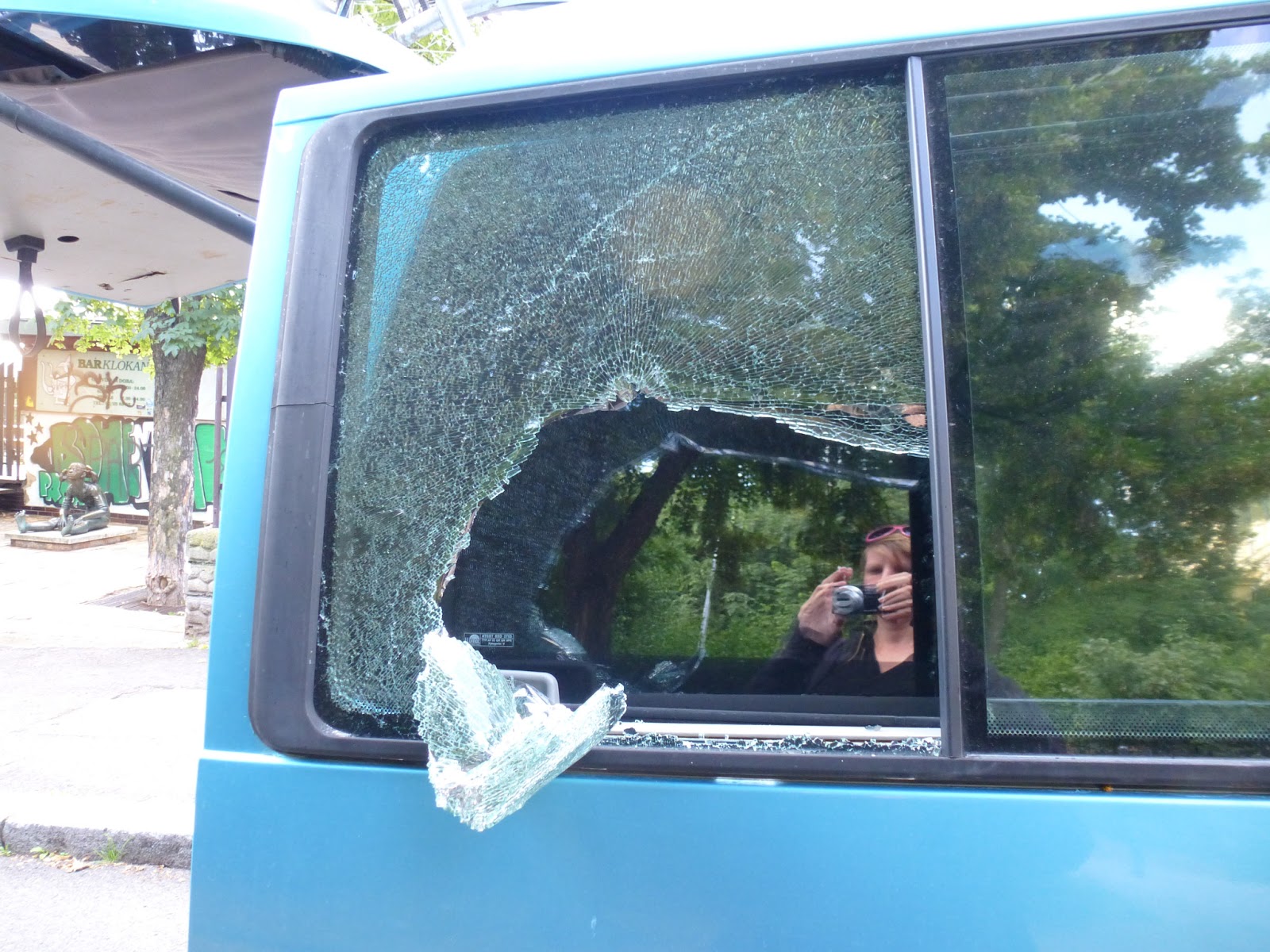 Being completely powerless to change our now and roll it back to an hour ago, where everything was rosy and we were blissfully happy. I’d sent an email for an appointment for the next ultrasound with an English-speaking doctor; he was having business cards made up; we were on budget with time to spare for both his shoots and my writing.

I’m fully cognizant that no, it’s not the end of the world. We’re both healthy, the baby’s healthy and Mork’s relatively in one piece (and let’s be honest, it could have been worse I suppose).

It’s just a little hard to focus on optimism when there’s such an overwhelming wealth of upset to distract.

Right now, Armando’s phoning the police (again, their ten minutes has morphed into an hour) and going not just through surrounding parks but nearby pawn shops in the hopes the thieves got rid of his things a.s.a.p.

There’s still hope that he might be able to find…something, right?

If not, we’ll be heading back to Milan to start over again. Not from absolute scratch, but from something fairly close to it.

P.S. We’d phoned the police as soon as we realized it happened (our coffee break from Mork was seriously 9am-10am). First, it was ten minutes. Then an hour. Then ‘we’ll call you when we’re on our way.’

Finally, around 3pm someone showed up: but we were parked on the left side of the street. Apparently, they separate jurisdiction by sides- so we had to wait an extra 30 minutes to fill in paperwork the light of day will never see.

I, for one, will be very happy to be done with today. I’d sing Annie if I still had an ounce of energy left, I swear. Grin.

A Look Back at Beautiful Brno